“Just One More Lockdown, My King…” 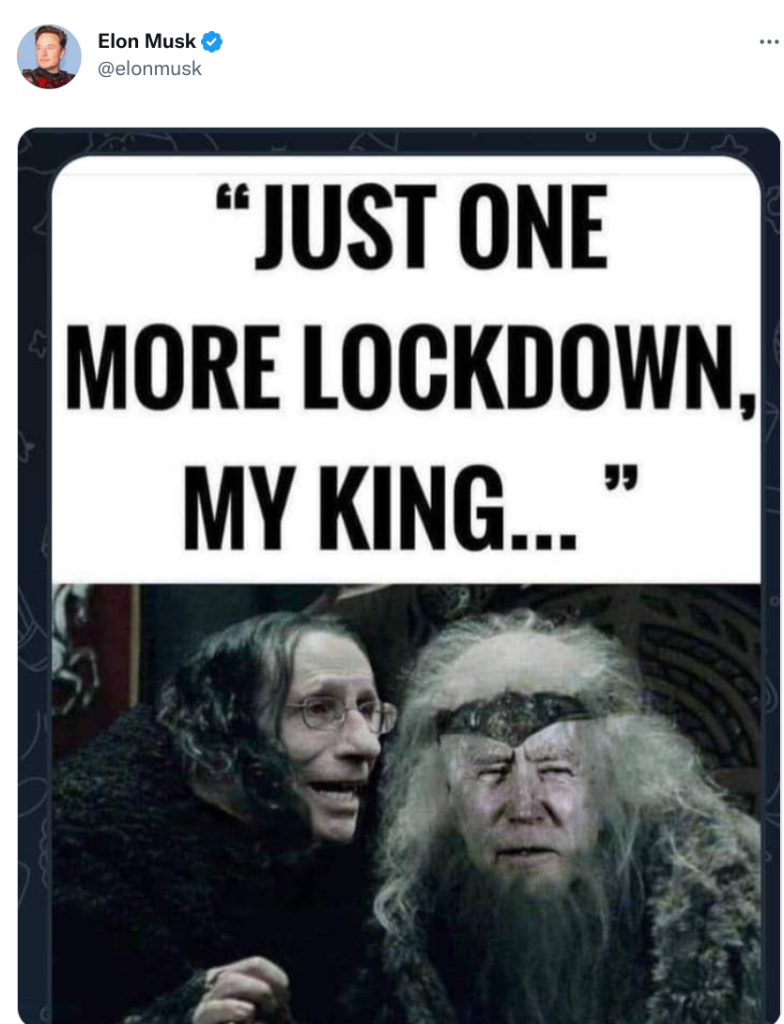 The #TwitterFiles, Covid Edition is on its Way

Elon Musk is dropping hints about major reveals as to what went on behind the Twitter curtains during the era of Covid suppression. Elon Musk took over Twitter in what feels like a whirlwind of chaos, shifting energy, cautious excitement from medical freedom advocates, and a somewhat glorious temper tantrum by those who have pledged undying (and sometimes dying) allegiance to The Institutions (The acronym health agencies + the acronym media outlets: FDA, CDC, NIH, CNN, MSNBC, NYT, etc)

The Twitter Files, as coined by “Chief Twit” himself, is the collection of documentation that Elon Musk purchased along with a social media platform for 40+ billion dollars. The files include information about what went on behind the scenes at Twitter in the Pre-Musk era, via internal emails and chats. What has been found so far is that employees had access to various forms of restricting accounts as well as access to direct messages and external communications of Twitter users. There are threads of documented communication between Twitter and various members of the U.S. government on a variety of topics.

New Media are Here to Stay

Elon is taking New Media and exploding it into the mainstream arena using sheer force and revealing a deep, dark well of information that Old Twitter kept under lock and key. Old Media are being left in a melting puddle, in a stuttering, dazed panic as Elon Musk bypasses the guardrails they used so arrogantly and dumps out shocking information.

The method he’s using is creative and efficient. He gave the documents to longtime independent journalists Matt Taibbi, Bari Weiss, and Michael Shellenberger. They’re all journalists who come from long careers in media as mainstream as it comes, such as The Rolling Stone and The NYT. They gradually removed themselves from the chains of working for giant corporations with special interests and took a quality group of readers with them. The journalists have tens of thousands of paid subscribers on Substack and are trailblazers in proving that media and journalists can be chosen by the people who trust them. Elon Musk handed the documents to the above journalists with the main caveat being that the information must be published on Twitter first and then may be published elsewhere, such as their own personal Substacks.

The complete breakdown of The Twitter Files can all be found on the Twitter feeds of Matt Taibbi, Bari Weiss, and Michael Shellenberger.

Part 3: The Removal of Donald Trump

The first four parts of the Twitter Files detailed the deep rot of censorship in the highest level of leaders at Twitter. They reveal the panic bordering on euphoria over at Twitter HQ, as management including Yoel Roth and Vijaya Gadde gleefully discussed finally having justification to kick the sitting POTUS off their platform. They reveal that the CDC and the White House had a direct channel to a special committee at Twitter for fast-tracking the flagging of tweets or accounts that the White House didn’t like. They reveal the utter hubris of those sitting behind the all-powerful “ban” buttons, as they pushed their thumbs on the scale of the 2020 election by actively censoring a century-old media outlet, when the NY Post reported on Hunter Biden’s laptop. Evil dictators throughout history would have given anything to hold the power held by the small group of censors at Twitter.

With all the caution that’s warranted when putting hope and faith in any person or solution, Elon Musk’s actions to date deserve a tremendous amount of credit and gratitude, and it appears as though this is just the beginning.

“Just One More Lockdown, My King”

Sunday morning, Elon Musk kicked off a brand new week with some spicy tweets following the drop of Part 4 that indicate that some seriously news-worthy reveals about Covid may be coming up shortly. He started by posting this cynical meme of Anthony Fauci whispering to Joe Biden: 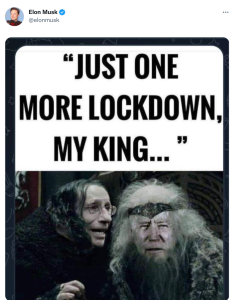 When asked in the responses when we’ll see the Twitter Files on Covid, including information about the suspensions of doctors and scientists for tweeting factual information, Elon Musk responded:

“Oh it is coming bigtime…”

He followed that up with two tweets indicating that Fauci himself will be implicated in coming “spicy” reveals.

This new form of media is mindblowing, and something for which to be grateful. While it’s a sad state of affairs that we’re dealing with such heavy censorship, the ability of us as individuals to communicate on a mass level and share information has never been available to humans before, and here at DailyClout we will be sure to keep you posted as the bombshells explode.