Is It Selfish To Have Kids? The Propagandizing of Gen Z: A DailyClout.io Special Premier of Claire Dooley’s Latest Film 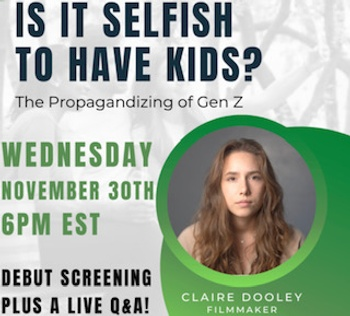 As the depopulation and climate change debates heat up – Gen Z filmmaker Claire Dooley asks her peers how they feel about the prospect of bringing children into this ever-increasingly expensive, chaotic, yet still joyful world.

With no noise, no spin, no agenda, and no narratives this is just a short beautiful film about real people in their twenties sharing their thoughts, trepidations, anticipations, excitements, and fears about the idea of being a parent and the political machine trying to influence them.

Claire Dooley is a filmmaker from McComb, Mississippi. Growing up, Dooley spent her spare time making home videos on a VHS with her family and friends.  In 2015 Claire co-founded a photography and videography business. Following an internship at The Highwire with Del Bigtree, Dooley put aside her studies as an Art Scholar at Millsaps College and pursued her film career. After being mentored by Ralph Madison in New Orleans, she went on to be an editor and cinematographer of Vaxxed II: The People’s Truth in Austin, TX. In 2019, Andrew Wakefield, producer of the controversial film Vaxxed: From Cover-Up to Catastrophe, brought Claire Dooley onto the team of 1986: The Act as the main editor.

In 2021, Dooley joined with Robert F. Kennedy, Jr.‘s Children’s Health Defense Films to produce Infertility: A Diabolical Agenda. CHDtv later asked Dooley to do live reporting in 2022. In her first independent film Between Peace and War, Dooley tells the story of the People’s Convoy, a group of activists and truckers protesting government mandates.