Have We Been Misled About the Russia-Ukraine War? 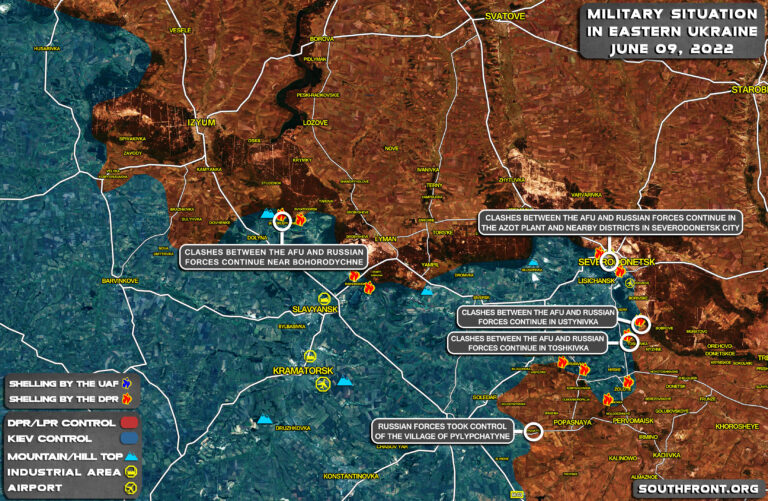 Events on the battlefields of Ukraine over the last month illustrate that Russia is quite clearly winning the war, although you would not know this from any articles or news broadcasts in the Western media.  Since late February, the collective Western media has engaged in a quite deliberate misinformation campaign whose central narrative is that Russia has suffered huge casualties in men and materials while suffering numerous defeats at the hands of the Ukrainian forces.

That is a substantial defeat when Russia and DPR/LPR forces control over 20% of Ukraine’s territory.

This misinformation campaign asserts that Russia failed in its attempt to capture Kiev and Kharkov during the early stages of the current war.  Of course, anyone with an elementary knowledge of military strategy would know that the Russian forces which occupied the suburbs of Kiev and Kharkov, were merely there to hold down large numbers of Ukrainian troops and prevent them from reinforcing their front lines in the Donbass region.  As the Western media focused on Russia’s ‘failed’ attempts to capture these cities, the bulk of the Russian war effort focused on liberating the Donetsk and Lugansk regions from Ukrainian control.

Events over the last month, from the surrender of the Ukrainian garrison at Azovstal in Mariupol to the Russian successes in taking cities such as Lyman and Popasna, reveal how the Russian military campaign is progressing according to plan.

The steady, methodical advance of Russian forces is happening despite the massive influx of weapons from American imperialism and its allies.

This daily advance by Russian forces is happening despite the 10,000 Western sanctions that were supposed to collapse Russia’s economy.

Instead of collapsing Russia’s economy, the endless rounds of sanctions have served to fuel inflation, which is hitting Western living standards hard, and undermining their economies. In the UK, it is estimated that 6 million households will face power cuts this winter to help maintain sanctions on Russia. The EU is compounding this economic madness by its decision to institute a partial ban on Russian oil. On the day this was announced, it pushed the price of a barrel of Brent oil to $124. (Source)

From week-to-week, Western media pundits and corporate politicians try to deceive ordinary people by the steady stream of “hopium” narratives which revolve around new rounds of sanctions, together with the new supplies of “wonder” weapons designed to alter the balance of forces on the battlefields of the Donbass. In the first few weeks of the war, the Western media crowed about how Western anti-tank and anti-aircraft weapons, such as javelins and stingers, were going to bring the Russian offensive to a grinding halt.  Once it became apparent that these weapons had had little or no impact on the battlefield, new narratives have been spun up about how the West will supply Ukraine with heavy weaponry to defeat those “evil Russians.”  Apparently, American howitzers, British and Australian armoured cars, Danish anti-ship missiles and now the prospect of American multiple rocket launcher systems (Heimars) are all going to help Ukraine defeat Russia on the battlefield (Source). Nothing could be further from the truth.

Ukrainian forces lack the training and combat experience to operate these weapons at an optimal level as part of a combined arms operation.

Besides this, Russia has an abundance of heavy artillery which far outstrips the firepower of the Ukrainian Armed Forces. Never mind the fact that Russia has complete dominance of the skies and is using its aviation forces and long-range missile forces to devastating effect.  On a daily basis, Ukraine’s military infrastructure is being degraded while Russia is systematically destroying large batches of newly delivered Western weaponry. To add insult to injury large amounts of Western weaponry are being captured on a daily basis by Russian and DPR/LPR forces. Telegram channels such as Intel Slava Z provide a wealth of video evidence of this.

As if this wasn’t bad enough, Ukraine is suffering hundreds of casualties every day while small but growing numbers of troops either refuse orders to fight or are surrendering to Russian forces to avoid being killed. Don’t take my word for any of this. There is an abundance of photographic/video evidence on Russian and Ukrainian Telegram channels to support my assertions.

It is quite clear that over the next period Russian forces aim to take the remaining cities of the Donetsk and Lugansk regions. They will not be deterred by further Western sanctions or arms supplies to Ukraine.

As I write this, it appears Russian forces have inflicted heavy casualties on the failed Ukrainian counter attacks outside Kharkov and Kherson. They have also had a string of victories in the Donbass, a highlight of which is the capture of Svyatogorsk, which marks the beginning of the campaign to take the city of Slavyansk.

Meanwhile, Russian/LPR forces have taken the residential areas of the city of Sverodonetsk as Ukrainian forces withdraw to the industrial zone of the Azot plant in the city. Individual Ukrainian units are retreating under fire to Lisichansk where Ukraine hopes to make a stand and stabilize the front.  Over the next period, other major objectives include the city of Kramatorsk.

It will be interesting to see how American imperialism and its European allies respond to the defeat of Ukraine’s most experienced forces in the Donbass.  Will they pressure Ukraine into negotiations with Russia? Or will they seek to manufacture an incident which will give them the pretext for putting NATO boots on the ground? This would massively escalate the situation and raise the prospect of open conflict with Russia.

Either way, this conflict marks a decisive turning point in geo-politics.

Over the next decade, we will witness an acceleration of the trend towards the world becoming increasingly polarized between two major trading/military blocs. On the one hand is the American led NATO and on the other is the Russian/China bloc, which feels itself under increasing attack from the West.

The only forces that can stop this drift to war between these nuclear armed powers are the ordinary people in the West and the East who have more in common with each other than the corrupt ruling classes who preside over them.

Dr. Leon Tressell is a geo-political historian who writes about Cold War 2.0.

Spread the love
more
This DailyClout article is the writer’s opinion.
One of our country’s most important freedoms is that of free speech.
Agree with this essay? Disagree? Join the debate by writing to DailyClout HERE.
Spread the love
more
Previous StoryIt’s Time To Recognize And Regulate The Militia
Next StoryStrokes: What Did Pfizer Know, and When Did They Know It? – Report