Freedom From Fear: A 12-Step Guide to Personal and National Recovery 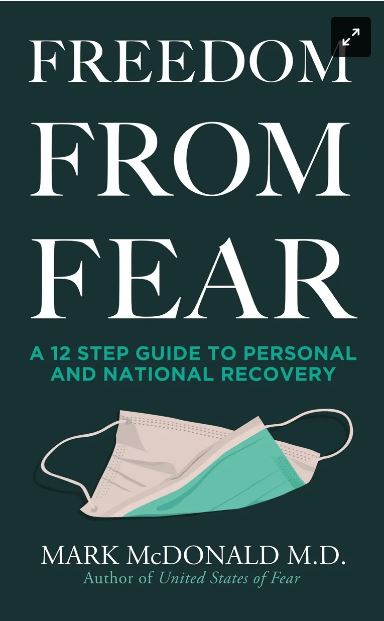 I’ve been absent on Substack for the past two weeks, but I haven’t been inactive. Since returning from an extended tour of the Balkans—Bosnia, Macedonia, and Kosovo—I have been completing the final details of my second book, Freedom From Fear, which will launch shortly.

My observation and belief is that the United States has moved beyond simply an extended state of fear and adopted a condition of fear addiction. I predicted this would occur earlier in the year, when I began noticing the unconscious practice of obsessive-compulsive rituals by anxious Americans, eager to sooth themselves through nonproductive and often harmful rituals. They reminded me of my patients who feel the need to tap their fingers in a specific order every time they put their fork down, or repeat a magic phrase in their head whenever their mother’s name is mentioned out loud. These rituals serve a psychologically protective function, which is to allay anxiety, yet they serve no practical purpose. They impede awareness, block one’s ability to be present with others, and sacrifice valuable time that could be spent living a full life.

The absence of fear-driven rituals in the European countries I traveled to struck me immediately. The people there do not live in fear. They do fear economic turmoil, tyranny by government, and war. But these are normal, healthy fears grounded in reality. Irrational fear simply has no foothold with them. The only people I saw moving about behaving in irrational, obsessive, anxious ways were Americans. They carried bottles of hand sanitizer with them to wipe down their menus at the restaurant (which was not using QR codes but actual paper menus—the horror!), they stood far away from other people while waiting in line at the grocery store, and, of course, they always wore their masks outside their hotel room. Have to be safe.

Returning to Los Angeles was a slap in the face. On my first day back, I walked from my home to a local bakery. It was mid-afternoon and quite hot outside. Three girls approached me from the other direction, all of them in their mid-twenties. All three were wearing cut-off shorts, flip-flops, and crop-tops that exposed their midriffs. And masks on their faces. One of them made eye contact with me, reached into her pocket, and pulled out a second mask, covering the first one as the group passed me on the sidewalk. Without thinking, I said out loud, “What a bunch of idiots.” Stunned, they said nothing and continued on. On some level, how can I blame them? Only days earlier, the LA County Department of Public Health, led by the fake doctor Barbara Ferrer, had announced that “due to an alarming rise in cases,” the indoor mask mandate would be brought back. Los Angeles is a dangerous place to be without a mask (or two).

A few nights later, I met a friend from Lebanon for dinner. He works evenings as a personal trainer, so dinner had to start no earlier than 8:30 PM. This would be considered early in much of Europe, at least in the summer, as restaurants don’t generally fill up until after 9:00 and stay open until at least midnight, often later. To our surprise, the Italian café with patio dining that we chose to visit closed at 9:00 PM. This has become the norm now in most cities in the United States. Everyone stays home, orders food delivered, and no longer socializes anywhere outside thier own dining room. We had barely received our food when we noticed one of the employees begin to stack chairs around us. By 9:15, we were ordered to leave. We looked for a nearby bar but found nothing open past 10:00. Eventually we stumbled across a small Turkish restaurant with a sign on the door that read, “Open until midnight.” Leave it to the Turks to maintain European hours. We sat outside at a table on the sidewalk and had tea and baklava until the restaurant closed.

While drinking our tea, we noticed an odd sight. A worker from a Japanese restaurant across the street (that had already closed) was pacing at the entrance to the parking lot. He was wearing a black and white uniform and had a mask on his face. There was no one anywhere near him. Suddenly, he began doing jumping jacks—with his mask on—and continued for nearly ten minutes. I stared at him for a long time, transfixed, thinking, “What has happened to this country?” His behavior exemplifies the fear addiction that has spread throughout the country. Certainly, the condition is more pronounced in some places—urban, coastal cities are the most severely affected—but I have traveled throughout the country over the past six months, and every place I visited has been infected to some degree.

This fear addiction is not only pervasive but normal and expected. I wrote in my upcoming book, “Social norms have been redefined not by the most courageous among us but by the most fearful.” Never before has a society considered obsessive-compulsive behavior to be normal or healthy. This is sick. This is destructive. This must be called out and treated. And that’s why I wrote my second book, Freedom From Fear.

Mark McDonald, M.D. – Psychiatrist and author of United States of Fear: How America Fell Victim to a Mass Delusional Psychosis and Freedom From Fear: A 12 Step Guide to Personal and National Recovery

Spread the love
more
This DailyClout article is the writer’s opinion.
One of our country’s most important freedoms is that of free speech.
Agree with this essay? Disagree? Join the debate by writing to DailyClout HERE.
Spread the love
more
Previous StoryModerna CEO Stéphane Bancel Compares COVID Shot to iPhone, Saying People Will Receive New Version Each Year
Next StoryCENSORED: The Injustice of What’s Been Done to Millions of Women must be Answered For