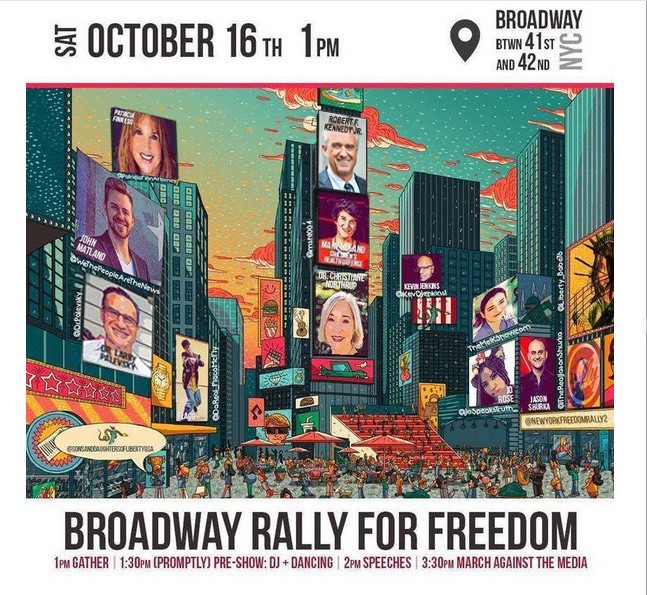 Thousands expected to gather in peaceful protest of vaccine mandates

New York City – Children’s Health Defense (CHD) will participate in tomorrow’s rally in New York,1:00 p.m Eastern on Broadway between 41st and 42nd, to support health freedom, informed consent, and the ability of Americans to make their own healthcare decisions.

Speakers include CHD board chair and chief counsel Robert F. Kennedy, Jr. and president Mary Holland.”It is ordinary people who can rescue us from tyranny,” said Kennedy.”We can say No to compliance with jabs for work, No to sending children to school with forced testing and masking, No to censored social media platforms, No to buying products from the companies bankrupting and seeking to control us. These actions are not easy, but living with the consequences of inaction would be far harder. By calling on our moral courage, we can stop this march towards a global police state.”

The rally comes as federal, state and local governments along with privately owned businesses are increasingly establishing mandates requiring vaccination in order to maintain employment and access to schools, hospitals, gyms, restaurants, sporting events and more.

“We are calling on all New Yorker’s and Americans to unite regardless of their personal medical choices and to celebrate and protect their right to make these choices without repressive and illegal measures from state and local governments,” said Kevin Peters, Co-founder of the New York Freedom Rally. “Our rights to work, to eat, to get an education and to determine our own medical care are being trampled on. This has to stop immediately.”

While the concern among Americans is centered on the threats to freedom and medical choice posed by mandates, many are also expressing doubts about the safety of COVID vaccines. According to the U.S. government’s Vaccine Adverse Events Reporting System (VAERS), between mid-December, 2020 and October 1, 2021, adverse side effects following COVID vaccines have been reported 778,685 times. This includes 16,310 deaths.

“Medical coercion is unacceptable, especially when it involves experimental, risky  products,” said Holland. “Governments and businesses do not have the power to make healthcare decisions for individuals. People must stand up for their rights to medical decision making. COVID vaccine mandates are an affront to democracy and do nothing to promote public health.”

The Broadway Rally for Freedom starts at 1:00 p.m. Eastern on Broadway between 41st and 42nd. In addition to Kennedy and Holland, speakers include Dr. Larry Palevsky, Kevin Jenkins, Christiane Northrup, Patricia Finn and Jason Shurka.  CHD will be covering the event live through its  online streaming platform, CHD-TV.

Children’s Health Defense is devoted to the health of people and our planet. Our mission is to end the childhood health epidemics by working aggressively to eliminate harmful exposures, hold those responsible accountable, and establish safeguards to prevent future harm.