CITIZENS’ CORNER: A Letter From Israel–“Israel is a Mess” 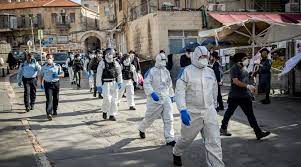 We can’t even leave the country unless “vaxxed.” I have a very sick husband  so I can’t leave in any case and I don’t really want to leave. However, the fact that our freedom to leave has been taken from us bothers me. Regardless of “vax” status, as of March this year, children under 16 cannot leave, even with their parents, without permission from a special government committee. It feels like a noose tightening around our necks. Not being able to leave reminds me of being rounded up and shut into ghettos. Why would the regime do this?? It doesn’t bode well.

It’s been quite the shock for me to realize just how wicked this government is. And most supposed “talmidei chachamim.” One of the leading Chabad rabbis here said it’s against the Torah to ignore “Covid restrictions.” Other rabbis have said the Torah demands we get injected. They’ve been saying that since the measles outbreak — which I think was a beta test for this. Those are not true rabbis in my mind.

Today another rabbis, as reported in Israel National News, which has become a regime mouthpiece, not a news site, said people who are injected should receive preferential treatment over uninjected in hospitals. Except in emergency situations. The regs here say only three time injected people can enter shul during the High Holidays. Everyone else has to daven outside. They keep locking down over holidays.

It is my theory, of late, that Israelis are easily manipulated and submissive to whatever the government demands of them because they are a traumatized people, going back decades. The Shoah, and then this regime has abused them, and abused everyone. All sectors. The Jewish sector is easy to manipulate. Not the hareidim quite as much. I am not hareidi but I admire their chutzpah during this time.

Never realized just how sucked into the globalist/WEF the government is. I used to think it was simply incompetent and greedy. I call it the regime now. It doesn’t deserve to be called a government. Zero legitimacy. But things are becoming more clear and people are revealing who they really are, which is a good thing.