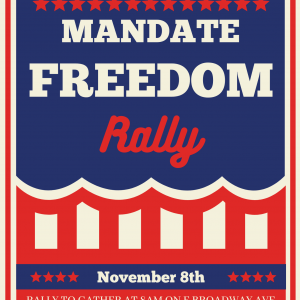 PIERRE,SD–NOVEMBER 8, 2021–In support of statements released Tuesday, October 26, 2021 by South Dakota Legislators calling for a special session to discuss the ongoing Covid-19 vaccine exemption denials, and subsequent discrimination caused by Biden’s mandate policies–concerned citizens and grass-root organizations from across South Dakota will unite at the South Dakota State Capitol Monday, November 8, 2021 at 8 am for a “Mandate Freedom” rally. Executive Director Mya Olson of Health Freedom South Dakota released the following statement ahead of the planned event;

“Employees are being strong-armed by some of the largest employers of South Dakota. These threats to livelihood are a direct threat to our economic growth, while discrimination against firmly held religious beliefs and documented medical exemptions directly threaten the security of our social compact, and state motto. Health Freedom of South Dakota is here to help people across this state understand the laws which are currently being violated, and to stand up for their unalienable rights. In doing so, we’re also securing South Dakota’s economic growth, by maintaining our ability to combat variants of COVID-19, while taking care of our citizens via a robust and thriving medical community. South Dakota cannot afford to end up like other states that have refused to protect employees, and as a direct result have had to close down hospitals, labor and delivery units, and are now suffering catastrophic revenue loss due to the lack of protections from discrimination.”

Attendees of the “Mandate Freedom” rally are individual citizens from all political parties and backgrounds. This bipartisan effort stands united in a call for an extended special session, in order to specifically address and codify safe guards for “medical, religious and naturally immune” exemption requests. Two bills have been drafted that would codify Governor Kristi Noem’s temporary executive orders, into permanent South Dakota state law.

Governor Kristi Noem has called a special session to address the impeachment of Attorney General Jason R. Ravnsborg, as well as Redistricting, yet announced that she would not be calling for a special session to address mandates during this time. Since then, thousands of emails, messages and phone calls have been sent by South Dakota citizens, requesting that their elected state representatives call for additional time during the scheduled special session, in order to vote on the two draft bills that would anchor Noem’s executive orders as permanent law.

“With the Legislative Assembly already being convened in a special session, this is the time
for lawmakers to see us in person, not after January when mandates for our children are sweeping the Nation. Now is the time to get ahead of this issue, and solidify protections from discrimination for all!”

The rally is set to begin at 8am with featured guest speakers, and will convene with a meet and greet of attending lawmakers. The event may continue throughout the week, pending Legislative action.