Biden Is Handing US Sovereignty To The W.H.O. and C.C.P. In 2 Weeks 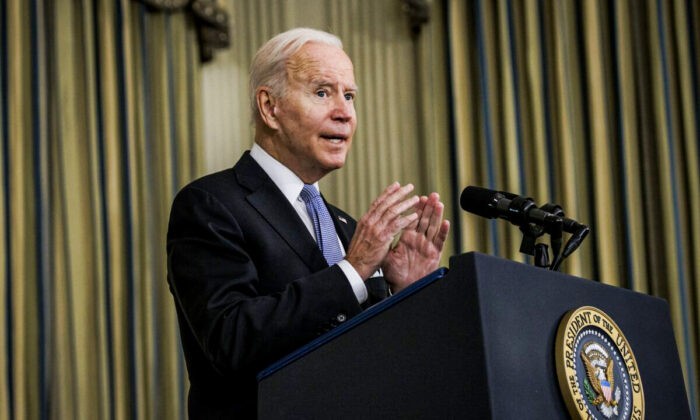 Biden Is Handing US Sovereignty To The W.H.O. and C.C.P. In 2 Weeks

From May 22-28, 2022, the 75th World Health Assembly will convene at United Nations headquarters in Geneva, Switzerland, with delegates from 194 nations to formalize an International Pandemic Treaty that will supersede the US Constitution and centralize global power under the World Health Organization (WHO). The WHO has for years been infiltrated and controlled by the Chinese Communist Party (CCP).  In January 2020, when the virus first appeared in Wuhan, China, the WHO spread CCP propaganda that the virus was “contained” to facilitate the CCP strategy to spread to virus globally. In March 2020 the WHO then pushed democratic nations to implement the totalitarian powers the Chinese government inflicts upon its’ 1.5 billion citizens: lockdowns, mandates, vaccine passports, digital “health” surveillance.

The Pandemic Treaty will give the WHO and the CCP the political clout to frame global narratives and control to advance the CCP’s hegemonic ambitions, and Biden has made clear that he will defer to the CCP’s commands.

In January 2022, the Biden Administration submitted amendments to 13 articles of the treaty ceding US sovereignity and legal authority to the CCP controlled WHO. If these amendments are approved, the WHO will have the power to declare an “international health emergency” nullifying the powers of nation states. This was done in the dark of night; on January 18th, 2022, Biden officials proposed these amendments and pushed other nations, like Canada and the UK, to sign the treaty, but made no official statement or held a single press conference.

This is the most dangerous attack on sovereignty in US history

Researcher James Roguski exposed this on his site DontYouDare.info – “Wake Up and Smell the Burning of the Constitution.”

“What would YOU do if you learned that a United States’ delegate to the World Health Organization had submitted a proposal to transfer the sovereignty of 194 nations over to the WHO??”

US corporate media is dead silent about Biden’s support for the CCP backed WHO Pandemic Treaty because they’ve earned millions in ad revenue from the CCP, in return for covering up the CCP’s COVID-19 pandemic, how Dr. Fauci’s sent millions of US taxpayer dollars to the Wuhan Institute of Virology, and the brutal crackdowns happening today in Shanghai, Beijing and hundreds of cities in China, where CCP officials in hazmat suits break down doors to drag citizens to quarantine centers and viciously beat and arrest anyone breaking lockdown orders by going outside to search for food.

INDIA’s news channel WION is reporting on the Chinese government’s vicious assaults on its own citizens, happening now, getting ZERO coverage in US media:

This totalitarian model of governance could soon be implemented in the United States. New York Governor Kathy Hochul is pushing hard for unconstitutional regulations to create quarantine centers where citizens can be held without cause on the governor’s orders for being a “threat to public health.”

A UN report from May 2021 called for more powers for the WHO stating that, “In its current form, the WHO does not possess such powers …To move on with the treaty, WHO therefore needs to be empowered — financially, and politically… The treaty should possess an adaptable incentive regime, [including] sanctions such as public reprimands, economic sanctions, or denial of benefits [emphasis added].”

Here is the  document with the proposed amendments submitted by the U.S. federal government. Pay particular attention to Article 12: Section 2 on page 8 of the document.

On DontYouDare.info creator James Roguski posted a video where he stated the core of these proposed changes go back to China.

“We’re saying it’s an emergency. We’re going to lock everybody down. We’re stepping in…They want to grab power. They’re changing article 12, section 2 (of the International Health Regulations) and it effectively wipes out 194 nations’ sovereignty to decide whether or not they allow an international organization to step in.”

All polling reveals that the majority of US citizens now realize that President Biden is dangerously compromised by the Communist China. The Biden family has for years enriched themselves with CCP bribes and kickbacks, and now the Bidens are selling out the United States to the CCP’s totalitarian dictatorship, which has ruled the world’s largest nation with an iron fist for 74 years, slaughtered 60-80 million people in state-sponsored genocides and famines, forbids freedom of speech or religion, unleashed hell with its pandemic, and is now set to stage a global coup.

In May 2019, the CCP walked away from a trade deal with the US that would have bound them to international norms and standards, which they violated for decades. The CCP then declared a “People’s War” on the US with their doctrine of “unrestricted warfare” – deploying biological, information and economic warfare to “destroy America from within.” The CCP Virus cost the US $55 trillion in damages, America is ravaged by inflation, food shortages, supply chain crises, and the leading cause of death in the US is Chinese manufactured Fentanyl, pouring through the open Southern Border. While corporate media hysterically beats the drums of war over Ukraine.

From May 22-28 in Geneva, Switzerland, WHO members will be voting on the Biden-backed amendments that will hand over our national sovereignty and authority to an unelected UN body, whose 2nd largest donor is the Gates Foundation, blatantly advancing the CCP’s global coup. During the same week, May 24th, 2022, Biden is set to remove Title 14, which will accelerate the ongoing invasion of America’s southern border.

Treaties need to be ratified by the US Senate. Senators must hear from their constituents and demand hearings.  Briefs must be sent to the Supreme Court to investigate why Biden officials have not followed proper protocols.

EMAIL AND CALL ALL SENATORS – NOT JUST YOUR HOME SENATORS