Opinion: As Trump Aids and Abets Turkey’s War Crimes, the UN Must Act 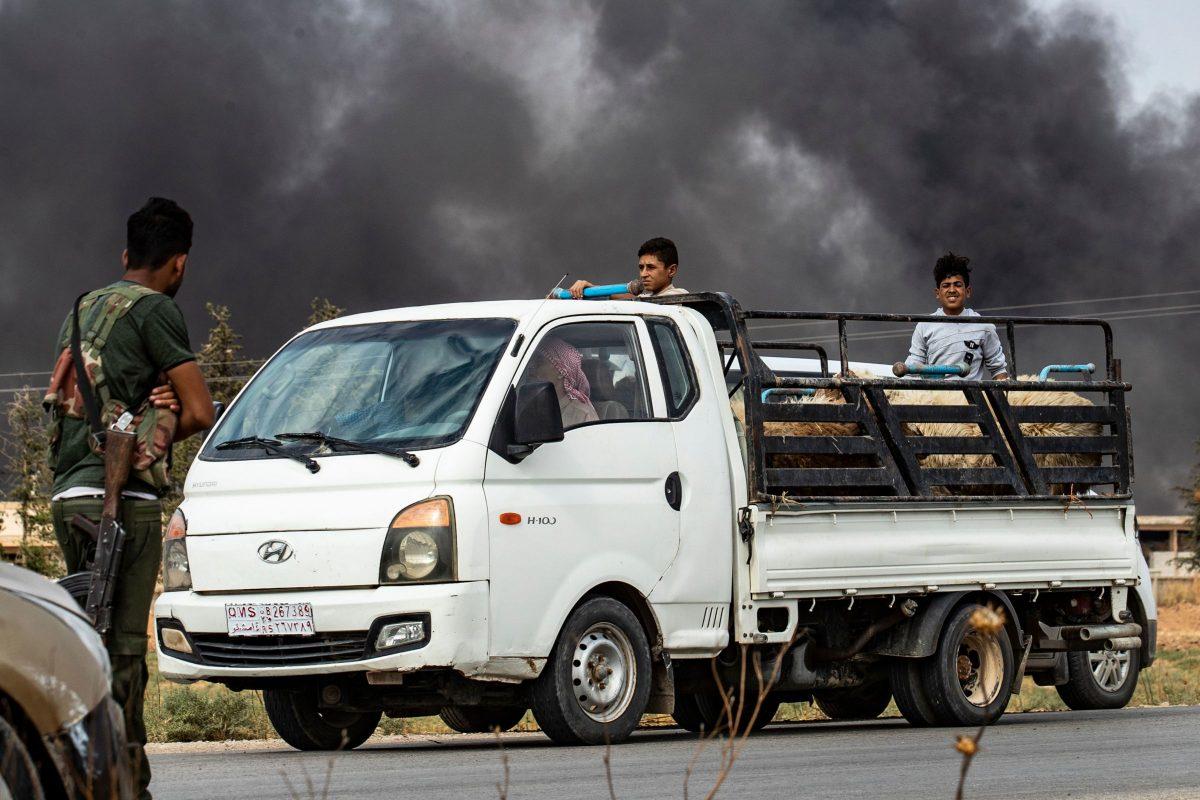 early two weeks have passed since Turkey launched its ground and air attack on Rojava, the autonomous region of northeast Syria, following Trump’s sudden removal of 1,000 U.S. troops from the area.

While the United States and Turkey reached a “ceasefire” agreement on October 17, there are ongoing reports of violations of the deal. A U.S. official told CNN that Turkish-backed forces broke the ceasefire on its first day, saying that they were either acting beyond the scope of Turkish control or Turkey “didn’t care what they did.” Two U.S. officials said the ceasefire “is not holding.”

The agreement calls for a five-day ceasefire and requires Kurdish fighters to leave an area of Syria along the Turkish border, in essence, relinquishing control of their territory. The United States would lift the threat of further sanctions on Turkey, and once a “permanent cease-fire” occurs, would remove the sanctions that Trump imposed in the wake of criticism of his abrupt withdrawal from the region.Turkish airstrikes have killed at least 20 civilians and 14 Kurdish fighters since the “ceasefire” was announced, according to the Kurds.

“The so-called cease-fire is not what we expected,” European Union Council President Donald Tusk told reporters. “In fact, it’s a demand of capitulation of the Kurds.” Turkey concurs. Turkish foreign minister, Mevlut Cavusoglu, said the deal was not a ceasefire but only a “pause for our operation,” adding, “We got what we wanted.”

Indeed, U.S. military officials told The New York Times “they were stunned that the agreement essentially allowed Turkey to annex a portion of Syria, displace tens of thousands of Kurdish residents and wipe away years of counterterrorism gains against the Islamic State.”

Turkey’s invasion of Syria is a war of aggression. It is incumbent upon the UN Security Council or General Assembly to take measures to restore international peace and security, as mandated by the UN Charter.

While the United States and Turkey reached a “ceasefire” agreement on October 17, there are ongoing reports of violations of the deal.

The United States has no right to occupy Syria in the first place. Yet intermittently for 50 years, the U.S. government has been trying to engineer regime change there, in violation of the International Covenant on Civil and Political Rights. Since 2015, the U.S., France, Britain and other countries have supplied weapons to the Syrian Democratic Forces, consisting largely of Syrian Kurds, to overthrow the Islamic State (ISIS).

As of 2011, the Kurds comprised between 5 and 10 percent of the Syrian population of 21 million. The largest ethnic minority in Syria, the Kurds live primarily near the northeast border.

Last year, at the behest of the Turkish government, the U.S. State Department blocked a Kurdish attempt to reconcile with the Syrian government.

“Donald Trump has the blood of the Kurds on his hand, but so do many of the politicians in our country from both parties who have supported this ongoing ‘regime change’ war in Syria that started in 2011, along with many in the mainstream media, who have been championing and cheerleading this regime change war,” Democratic presidential candidate Rep. Tulsi Gabbard accurately noted.

Now Turkey is mounting a war of aggression in Syria and committing war crimes against the Kurds, aided and abetted by the United States. “Turkish military forces and a coalition of Turkey-backed Syrian armed groups have displayed a shameful disregard for civilian life, carrying out serious violations and war crimes, including summary killings and unlawful attacks that have killed and injured civilians, during the offensive into northeast Syria,” Amnesty International reported on October 18.

This report documents indiscriminate bombardment, summary killings and abductions. It discusses “gruesome details of a summary killing in cold blood” of the prominent Syrian-Kurdish female politician Hevrin Khalaf by a coalition of armed Syrian groups that Turkey supports and equips. Her injuries included “multiple gunshot wounds to the head, face and back as well as fractures to her legs, face and skull, detachment of skin from her skull and loss of hair as a result of being dragged by the hair.”

The Syrian Observatory for Human Rights, a U.K.-based monitoring group, reports that the Turkish military has killed at least 436 peoplesince its offensive began on October 9. The Kurdish Red Crescent puts the number of civilians killed at a minimum of 235 and Kurdish forces say 22 children have been killed. Between 160,000 and 300,000 people have fled from their homes.

“In one of the most horrific attacks documented, a Kurdish Red Crescent worker described how he pulled bodies from the wreckage of a Turkish air strike … in which two munitions landed near to a school in Salhiye, where civilians displaced by the fighting had sought shelter,” according to the report.

Additionally, there are numerous accounts of Turkey using illegal white phosphorus-loaded munitions, which burn to the bone and cannot be extinguished by water.

The Syrian Observatory for Human Rights reported that deliveries of humanitarian assistance have been prevented from entering Ras al-Ain, a border town where most of the ceasefire violations have occurred.

Turkey’s October 9 invasion of Rojava was greenlighted by Trump’s abrupt October 6 removal of U.S. troops from the region after a phone call with Turkish President Recep Tayyip Erdoğan. Trump and Erdoğandiscussed the forthcoming Turkish invasion during the call. “Today, President Donald J. Trump spoke with President Recep Tayyip Erdogan of Turkey by telephone,” the White House press statement said. “Turkey will soon be moving forward with its long-planned operation into Northern Syria. The United States Armed Forces will not support or be involved in the operation, and United States forces, having defeated the ISIS territorial ‘Caliphate,’ will no longer be in the immediate area.”

Trump knew that Turkey would attack the Kurds and he sanctioned it.

Before Trump withdrew the U.S. troops, the Kurds had been suppressing ISIS in the region. City University of New York professor Ozlem Goner told Democracy Now! that after the U.S. withdrawal, “Turkey actually bombed the ISIS prison so that [ISIS prisoners] can escape.”

Turkey intends to transfer many of the 3.6 million Syrian refugees currently living in Turkey over the border into Syria, which would violate the Geneva Conventions.

Turkey’s war of aggression in Syria is illegal.

On October 10, in the wake of a storm of criticism from both Democrats and Republicans of Trump’s precipitous withdrawal from Rojava, the White House denounced the Turkish invasion, issuing a statement that said, “This morning, Turkey, a [North Atlantic Treaty Organization] member, invaded Syria. The United States does not endorse this attack and has made it clear to Turkey that this operation is a bad idea.”

The U.S. Is Aiding and Abetting Turkey’s War Crimes Against the Kurds

But for Trump’s sudden pullout of U.S. troops, Turkey would not have invaded Rojava. The United States is aiding and abetting Turkey’s war crimes.

Second, U.S. officials provided the means to commit war crimes. The United States is the primary exporter of weapons to Turkey. In 2017, the U.S. gave $154 million in aid to Turkey, the fourth highest amount provided to any country in Europe and Asia. And The New York Times reported that the U.S. furnished intelligence, including surveillance data, to Turkey that may have enabled its assault on the Syrian Kurds..

Third, Trump knew that once the U.S. troops left Rojava, the Turkish military would invade it.

Moreover, Trump threatened genocide on October 17 when he said that the Kurds near the Turkish border had to be “cleaned out” by Turkey. He lauded the “ceasefire” because now Turkey was “not going to have to kill millions of people.”

But Mazlum Kobani, commander of the Syrian Democratic Forces, told The New York Times, “There will be ethnic cleansing of the Kurdish people from Syria and the American administration will be responsible for it.”

The Genocide Convention defines genocide as “any of the following acts committed with intent to destroy, in whole or in part, a national, ethnical, racial or religious group”: “Killing members of the group, causing serious bodily or mental harm to members of the group, or deliberately inflicting on the group conditions of life calculated to bring about its physical destruction in whole or in part.”

On October 15, the UN Office of the High Commissioner for Human Rights warned that Turkey could be held responsible for war crimes.

If the Security Council Doesn’t Act, the General Assembly Should

Turkey’s war of aggression in Syria is illegal. “Aggression is the use of armed force by a state against the sovereignty, territorial integrity or political independence of another state, or in any other manner inconsistent with the Charter of the United Nations,” according to General Assembly Resolution 3314.

The UN Charter allows the use of military force against another state only in self-defense or when sanctioned by the Security Council. Turkey was not acting in self-defense and the council did not approve its invasion of northeast Syria.

It is essential that the Security Council or the General Assembly act immediately to stop the carnage and allow humanitarian relief into the war-torn region.

Under the UN Charter, the Security Council has primary responsibility to maintain and restore international peace and security. The Security Council should convene immediately, condemn Turkey’s aggression, order a real ceasefire and a no-fly-zone over Rojava, send peacekeeping troops to enforce the ceasefire, require that countries immediately suspend weapons transfers to Turkey, and mandate that all parties provide unfettered access to humanitarian assistance, including to those displaced by the conflict. It should also urge the parties to pursue a diplomatic solution to the conflict and call on all countries to open their borders to refugees from the region.

But the United States and Russia would likely veto such a resolution. When the council is unable to act because the five permanent members cannot agree, there is a procedure for the General Assembly to fulfill that role. It is contained in the “Uniting for Peace Resolution.”

Once the Resolution is invoked, the General Assembly can recommend collective measures to “maintain or restore international peace and security.”

Syrian President Bashar al-Assad concluded a deal, brokered by Russia, to protect the Kurds from Turkey’s onslaught. In return, the Kurds agreed to allow the Syrian government to enter two border towns, although the Kurds intend to retain their military structure and control of local government.

On October 16, the House of Representatives, by a bipartisan vote of 354-60, adopted H.J. Res. 77, opposing “the decision to end certain United States efforts to prevent Turkish military operations against Syrian Kurdish forces in Northeast Syria.” It calls on Turkey to end its military incursion, protect the Kurds and “present a clear and specific plan for the enduring defeat of ISIS.”

Meanwhile all 28 countries of the European Union and Britain had agreed to suspend arms sales to Turkey.

Veterans for Peace issued a statement in which it “condemns the Turkish invasion of Syrian Kurdistan and calls on the United States government to withdraw any support for the incursion.” It also calls on the U.S. “to pursue a diplomatic resolution to the current crisis and to reopen our borders to allow in more refugees from this war torn region.”

It is essential that the Security Council or the General Assembly act immediately to stop the carnage and allow humanitarian relief into the war-torn region.

Marjorie Cohn is professor emerita at Thomas Jefferson School of Law, former president of the National Lawyers Guild, deputy secretary general of the International Association of Democratic Lawyers and a member of the advisory board of Veterans for Peace. Her most recent book is Drones and Targeted Killing: Legal, Moral, and Geopolitical Issues.
Previous StoryThe Week In Congress: Congress “Suspended the Rules” Again
Next StoryBulletin Board: Democratic Party Announces Pre-Endorsement Conference Results Despite Election Irregularities
--
Write for DailyClout