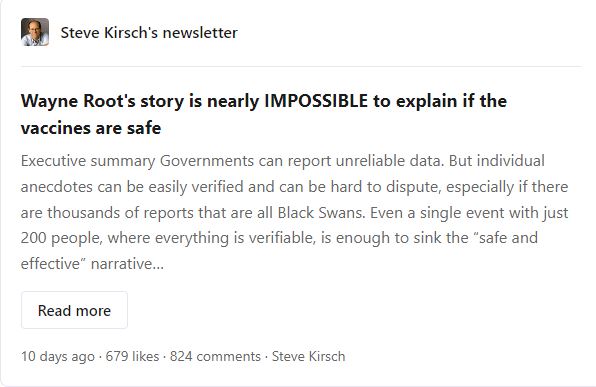 I am inclined to say “Yes.” Here is why.

On August 10, 2022, the Silicon Valley tech entrepreneur, and the now-Executive Director of Vaccine Safety Research Foundation (VSRF), appeared on Fox News’ Tucker Carlson Tonight. Kirsch made a number of claims that are well-documented among those of us who follow mRNA vaccine safety issues, but that may have been alarming surprises to a general audience.

Kirsch noted, for instance, that “the FDA and CDC falsely assured us that the approved COVID mRNA vaccines were safe and effective.” This statement is of course completely accurate. The reports by our War Room/DailyClout Pfizer Documents Research Volunteers on DailyClout.io abundantly prove that this is correct, as have multiple other distinguished analysts such as Dr. Robert Malone, Dr. Peter McCullough, and Dr. Paul Alexander. Kirsch noted that “the COVID mRNA vaccines are the most dangerous vaccines created by man [for the general inoculation of the general US public].” He cites 250 deaths from a Sixty Minutes report on the smallpox vaccine, comparing that to the deaths from mRNA vaccine.  Certainly, in regard to the deaths of babies we know is correct, with more babies of mRNA vaccinated mothers having died than have babies of mothers vaccinated with all earlier vaccines, combined. [https://dailyclout.io/risks-to-babies-of-vaccinated-mothers-as-reported-in-vaers/]

Kirsch also invoked the wedding of Wayne Allyn Root, the conservative talk show host and commentator. Root had pointed out that of 200 guests at his wedding eight months earlier, 26 of those had been seriously ill or injured, and seven had died; all of these were vaccinated. Root also had said that among his friends and family who had been at his wedding who were unvaccinated, none to his knowledge had gotten sick or died.

Most controversially, perhaps, though, Kirsch stated that “hundreds of thousands” of people had died from the mRNA injections and that “millions” had suffered injuries related to these injections. Brian Kilmeade, the host, responded, “So you know, we can’t verify those numbers, these are numbers that you have.” 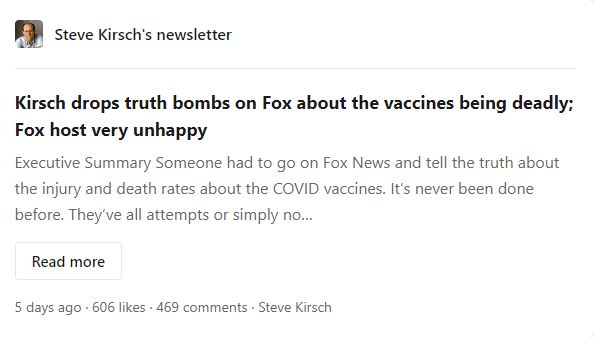 Kirsch was immediately attacked on other platforms, for the last two data points that he asserted regarding injuries and deaths. Media Matters — an organization of which he was an original donor — accused Kirsch of making false statements. But, in fact, the Media Matters content about this is truly weird: there is a headline stating that Kirsch “Lied” — strong language, bound to be picked up by SEO to blacken search results about Kirsch — but there is zero analysis presented, showing that to be the case: https://www.mediamatters.org/fox-news/fox-news-guest-lies-about-covid-vaccine-killing-hundreds-thousands-and-says-its-most. Kirsch contacted both founder David Brock by email, as well as the corrections email address, and to date, he reports, he has had no response. He tried to comment on the article itself to say that it was incorrect, but he said that the organization notified him that he was permanently banned from commenting.