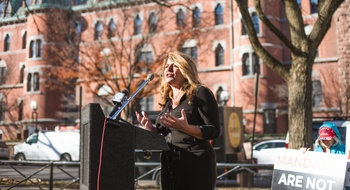 Dr. Wolf warned, at a rally held at Yale, of the numerous harms the experimental mRNA vaccines cause to female reproductive health, and to the cardiac health of young males. The irrefutable harms Dr. Wolf is reporting on are found in the court-ordered released Pfizer trial documents, international peer review studies, and the VAERS database – what Dr. Wolf has subsequently uncovered is something she believes should be reported on y the media.

Renowned Feminist, C.E.O. of DailyClout.io and spokesperson for the War Room/Daily Clout Pfizer Documents Analysis Project is available for interview

Dr. Wolf appeared on Children’s Health Defense on December 8th, 2022 to speak about this latest revelation. Dr. Wolf’s husband, a former member of the US Intel Community Brian O’Shea, found, after deep diving, the financial motive for Yale to inject healthy students with a booster that does not stop transmission.

The most egregious part of this story is that only the students are mandated to get the booster. Yale Staff and faculty are exempt from this requirement.

Spread the love
Spread the love
Previous StoryCrimes Against Students With Naomi Wolf
Next StoryYale Exposed, Follow the Money: “They Need HHS More Than They Need Their Students”