The Week In Congress: H Res 660 the “Impeachment Resolution” Changes the Rules of Impeachment in a Partisan Way, and Hides Information from the Public 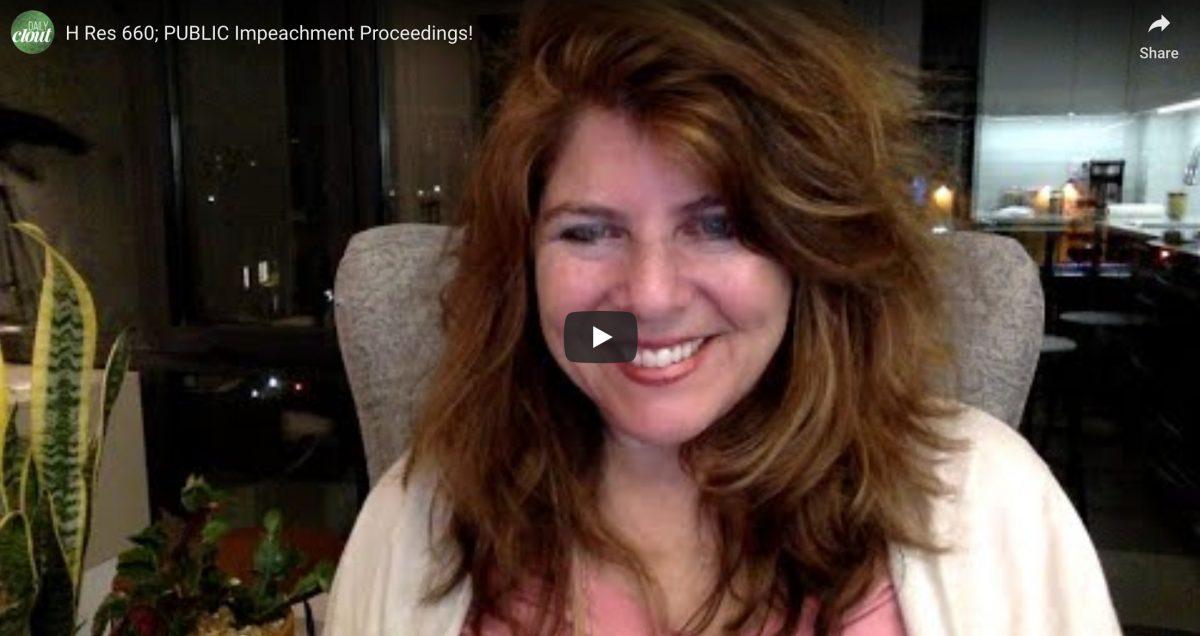 H Res 660 the “Impeachment Resolution” changes the rules of impeachment in a partisan way, and hides information from the public. It was passed recently and raises major red flags.

We are not partisan, but there is no way to escape the conclusion that this Resolution is written to give vast powers to the Chair of the Committee that is overseeing the impeachment hearings. It takes information away from the people, and it is written in an obvious way to disadvantage the outcome of impeachment hearings for the President whose name appears specifically in the description of its intention: Pres. Donald Trump.

The Chair has broad powers to ask for witnesses and to demand memos, records, books, notes, phone conversation transcriptions and so on. But if the ranking minority member of the same committee wants to call a witness, or ask for books, memos, etc. — he or she has to submit a detailed written request IN ADVANCE in order to do so.

But how can you know what a witness will say in advance of examining them? These bulky and discriminatory rules also make it difficult for the ranking minority member to react to negative testimony that may emerge on a given day, from a witness that the Chair has summoned.

The Chair, though, is given no such burdens; so this Resolution really skews the results of what Americans will hear in impeachment hearings, and which witnesses will be called, and what evidence will be shown – in favor of the political party of the Chair of the Committee.

There’s been a lot of debate about the purported secrecy of impeachment hearings. This bill CLEARLY states that an electronic transcript has to be made of the hearings and that that must be made public. That section was, no doubt, inserted in response to complaints about the secrecy of hearings previously.

That option to redact “sensitive” material clearly gives the party of the Chair of the committee, powers to keep anything embarrassing to one party, but it does not give the two parties powers equally.

This permission to redact “sensitive” material is also a stunning violation of the First Amendment and a new benchmark for the US Legislative branch in demanding powers to keep secrets from the American people even though records created by the Legislative Branch are all supposed to be public, if they are not classified. Whatever party is in power after this impeachment hearing process, the American Legislature will have grave new powers over future executives, and new powers over the American people themselves.

The final point is how alarming it is that this Resolution, with its biased set of rules, exists at all. As those of you who follow DailyClout know, we already did a video on the process of impeachment. The Founders already left us all the tools and rules we need to impeach Presidents and other elected officials.

The fact that NEW RULES have now been created, rules that allow Congress to HIDE information from the American people at its own subjective whim – is as disturbing as a possible Resolution might be that changes the rules of how Presidents are elected or how bills become laws in our system.

We at DailyClout.io are not partisan: but we must note that this is the second Resolution that is a huge land grab for power, that changes the rules of democracy in a new and serious way and that gives vast new powers to members of Committees, that the Democrats have passed.

A Resolution is simply supposed to express the sentiment of Congress — not to completely transform some aspect of how our democracy functions.

The last Resolution to have a similar structure of vastly empowering committee, while bypassing the usual rules of our system, was the Green New Deal.