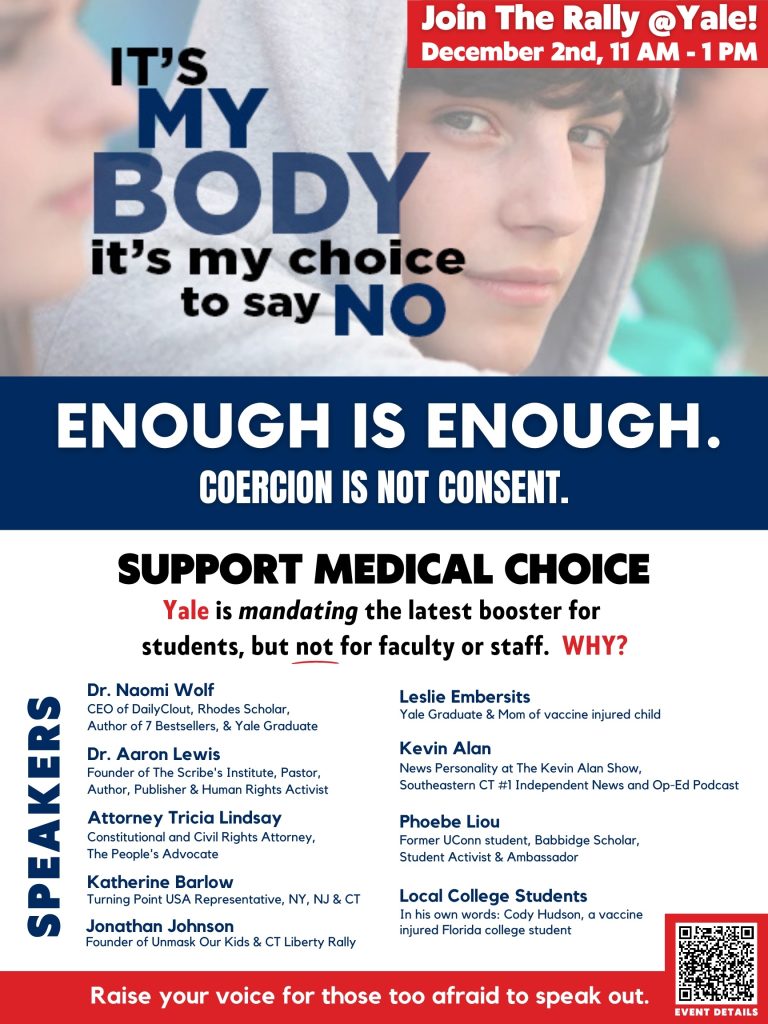 Yale University mandated the latest booster for students, but NOT for faculty/staff.

WHY? Students are not lab rats! Stand Up & Say No More!

Join us at this peaceful rally to learn about proper informed consent, to support medical choice and to understand your rights!

The VAST majority of Yale college students were coerced into taking the Covid19 shots, even though there has not been proper safety testing. NO clinical trials have been done for this age group. It is well established that healthy 18-24 year olds are not at risk.

As stated directly by the CDC, this shot does not stop transmission or spread.

Several speakers, including attorneys & students will be there! You don’t want to miss this event!

Scroll down for more info! NOTE: EXACT LOCATION TO BE ANNOUNCED…

Did you know Yale University now mandates the Covid-19 bivalent booster for students, but not for faculty or staff*? Here are the facts:

> The bivalent booster was granted emergency use authorization based on data from mice.

> No human data is publicly available for this product.

> No safety testing has been done.

> No formal risk-benefit assessment exists for this age group.

A Note from Dr. Naomi Wolf:

“I will be speaking at the No College Mandates rally at Yale University, my alma mater, tomorrow.
I’ll be highlighting information about severe menstrual and reproductive damage to young women and cardiac damage to young men, from mRNA injections, as my team of 3500 medical and scientific experts have confirmed via their analysis of the internal Pfizer documents released under court order.
As a Yale alumna, I’ll be noting that the Yale motto, Lux et Veritas, ‘Light and Truth’, as well as a liberal arts education in general, stands counter to these policies of coercion, suspension of informed consent, and censorship.
I’ll point out that colleges have a moral standing ‘In Loco Parentis’ and a legal obligation not to create a dangerous context for study. There will be waves of lawsuits as well as criminal filings for universities physically harming a generation of young people and Yale will be at the forefront unless the institution immediately suspends its illegal mandate.”

Why is Yale Important?

Yale and other elite universities set the tone for higher education policies across the nation. If Yale is pressured to drop its mandates, other schools may follow. This is a high profile case and it’s why we ask you to participate even if you do not have a Yale affiliation.

Yale students have been under some of the strictest policies since the pandemic began. As a result, mental health issues are spiking. Students we interviewed know of peers with myo/pericarditis, strokes and other serious adverse events and are rightly concerned about the danger of these mandates.

Let’s protect the next generation like Sweden, Norway and Denmark** where they offer CHOICE.

Stand up. Speak up. The otherwise healthy young adults is NOT at risk of death or injury from Covid-19 infection. it is time to say NO MORE to mandates.

Thank you for supporting medical choice!