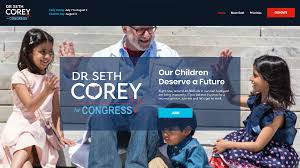 Some of us have known Dr Seth Corey for more than 30 years, and we enthusiastically endorse him for Congress for Ohio District 11 Special Election August 3.
Seth is more than an internationally recognized pediatric hematologist/oncologist treating and researching children with blood and cancer disorders for more than 30 years.
No other candidate for Ohio CD11  has been as active and supportive for Judaism, Israel, and a strong US-Israel alliance as Seth.
Among Seth’s contributions and commitments are
1. Seth’s letter to the NYTimes prompted Michelin to name “Israel” on its Middle East Maps.
2. At his own expense, Seth spoke in support of Israeli Health Ministry to a biased American Public Health Association annual meeting symposium, when the Israel was being falsely accused of contributing to the decline of health among Arabs.
3. Seth created and started the Pittsburgh Israeli Film Festival in 1994, now in its 27th year and run by Pittsburgh UJF
4. Seth has lobbied with AIPAC for Israel
5. Seth has written letters and columns defending the deligitimiation or falsehoods about Israel
6. Seth co-led a doctors’ group to successfully combat media bias against Israel in medical and scientific journals
7. Seth promotes Jewish education, having sent his children to Talmud Torah
8. Seth routinely donates to JNF, Mazon (A Jewish Response to Hunger), Yad Sarah, Magan David Adom, Birthright, Chabad, Hillel, Weizmann Institute, and Technion.
Seth is the only candidate for Congress to represent us who will
1. Sponsor legislation banning Boycott, Divestment, and Sanctions against Israel
2. Sponsor legislation banning discrimination and harassment of Jewish students and professors on college campuses
3. Demand a thorough investigation of Iran-supported terrorism and nuclear arms developmenty
4. Sponsor legislation prohibiting funds to government and non-government agencies which support Hamas and other terrorist organizations.
5. Condemn by NAME anti-semitism wherever it comes from, be it from White Supremacists on the right or Rashid Tlaib or Ilhan Omar from the far left.
Please support and vote for
Dr. Seth Corey for Congress Ohio CD11 on August 11.
PO Box 1628 Cleveland, OH 44106
coreyforohio.com