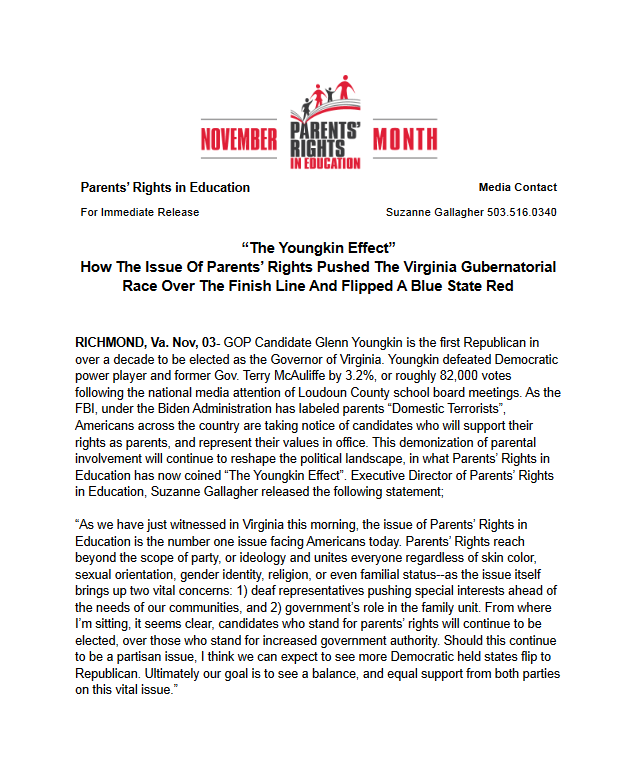 RICHMOND, Va. Nov, 03– GOP Candidate Glenn Youngkin is the first Republican inover a decade to be elected as the Governor of Virginia. Youngkin defeated Democraticpower player and former Gov. Terry McAuliffe by 3.2%, or roughly 82,000 votesfollowing the national media attention of Loudoun County school board meetings. As theFBI, under the Biden Administration has labeled parents “Domestic Terrorists”,Americans across the country are taking notice of candidates who will support theirrights as parents, and represent their values in office. This demonization of parentalinvolvement will continue to reshape the political landscape, in what Parents’ Rights inEducation has now coined “The Youngkin Effect”. Executive Director of Parents’ Rightsin Education, Suzanne Gallagher released the following statement;

“As we have just witnessed in Virginia this morning, the issue of Parents’ Rights inEducation is the number one issue facing Americans today. Parents’ Rights reachbeyond the scope of party, or ideology and unites everyone regardless of skin color,sexual orientation, gender identity, religion, or even familial status–as the issue itselfbrings up two vital concerns: 1) deaf representatives pushing special interests ahead ofthe needs of our communities, and 2) government’s role in the family unit. From whereI’m sitting, it seems clear, candidates who stand for parents’ rights will continue to beelected, over those who stand for increased government authority. Should this continueto be a partisan issue, I think we can expect to see more Democratic held states flip toRepublican. Ultimately our goal is to see a balance, and equal support from both partieson this vital issue.”

Parents’ Rights in Education is a PAC and 501(c)(3) committed to equality and equalprotections for ALL parents, and ALL families. Please stand with us, speak up, and joinour cause. November is Parents’ Rights in Education Month. Have your school boardmake a public commitment to honor the integral community partnership with parents byadopting our proclamation, found here.