“OPINION”: Supreme Court Drives a Stake Through the Heart of the Voting Rights Act 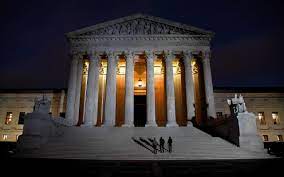 Divided strictly along ideological lines, the Supreme Court construed what was left of the historic Voting Rights Act (VRA) to uphold two Arizona voter suppression laws that civil rights organizations had challenged for disproportionately burdening voters of color. This decision sends a dangerous signal to states that the courts are likely to uphold their voter suppression laws that make it harder for people of color to vote.

In Brnovich v. Democratic National Committee, the Court’s six right-wingers ruled, over the dissent of the three liberals, that Arizona’s “out of precinct policy” and “ballot harvesting” provision did not violate Section 2 of the VRA. Section 2 forbids any voting procedure that “results in a denial or abridgment of the right of any citizen of the United States to vote on account of race.”

Samuel Alito, who authored the majority opinion, wrote that voting restrictions should be struck down only if they impose substantial burdens on voters of color that prevent them from voting. He said, “where a State provides multiple ways to vote, any burden imposed on voters who choose one of the available options cannot be evaluated without also taking into account the other available means.”

Alarmingly, the majority says the prevention of “voter fraud” — that bogus mantra of Republicans and Donald Trump during the election — is a legitimate state interest that can overcome proof of a burden on voters and uphold a voting restriction.

In her dissent, Elena Kagan lambastes the majority for writing “its own set of rules” and “limiting Section 2 from multiple directions.” The majority, Kagan charges, rests its decision “on a list of mostly made-up factors, at odds with Section 2 itself.” She says the “important circumstances” that the Court invents “all cut in one direction — toward limiting liability for race-based voting inequities.”

The “out of precinct policy” requires election officials to discard a ballot that was cast at the wrong precinct. If a voter’s name does not appear on the voting rolls in a certain precinct, she can cast a provisional ballot, but if it is later determined that she voted at the wrong precinct, her ballot will be thrown out.

The other voting restriction, known as “ballot harvesting,” makes it a felony for an individual to collect and deliver another person’s ballot. Although the provision contains exceptions for family members, caregivers, election officials and letter carriers, it criminalizes the assistance of community organizers, campaign workers, and others who help deliver ballots for people.

Last year, the Ninth U.S. Circuit Court of Appeals stuck down both provisions as violative of Section 2 because they disproportionately disadvantage voters of color.

(a) No voting qualification or prerequisite to voting or standard, practice, or procedure shall be imposed or applied by any State or political subdivision in a manner which results in a denial or abridgement of the right of any citizen of the United States to vote on account of race or color….

(b) A violation of subsection (a) is established if, based on the totality of circumstances, it is shown that the political processes leading to nomination or election in the State or political subdivision are not equally open to participation by members of a class of citizens protected by subsection (a) in that its members have less opportunity than other members of the electorate to participate in the political process and to elect representatives of their choice.

Alito wrote that “any circumstance that has a logical bearing on whether voting is ‘equally open’ and affords equal ‘opportunity’ may be considered” in the calculation of “the totality of circumstances.” Although he said this is not an exhaustive list, Alito cited five “important circumstances” that “should be mentioned.” When these circumstances are taken together, it would be difficult to prove a Section 2 violation in the future. They are:

The majority held, “In light of the modest burdens allegedly imposed by Arizona’s out-of-precinct policy, the small size of its disparate impact, and the State’s justifications,” the rule did not violate Section 2 of the VRA.

But Kagan pointed out that in 2012, about 35,000 ballots throughout the country were thrown out for being cast at the wrong precinct, and nearly one-third of them — 10,979 — were cast in Arizona. She noted, “Elections are often fought and won at the margins — certainly in Arizona,” adding that Joe Biden beat Donald Trump by just 10,457 votes last year.

The Court also held that the ballot harvesting provision did not create a disparate burden on the voter. The “modest evidence of racially disparate burden,” Alito wrote, was overcome by the State’s justification, which was fraud prevention.

Majority Creates Exceptions to Save Laws Like Arizona’s, Kagan Writes

Kagan notes, “Rarely has a statute required so much sacrifice to ensure its passage. Never has a statute done more to advance the Nation’s highest ideals. And few laws are more vital in the current moment. Yet in the last decade, this Court has treated no statute worse.”

Indeed, the Court dealt a major blow to the Voting Rights Act in the 2013 case of Shelby County v. Holder, when it struck down Section 5 of the VRA that had required preclearance of new voting rules in jurisdictions with a history of racial discrimination. Ruth Bader Ginsburg wrote in dissent, “Throwing out preclearance when it has worked and is continuing to work to stop discriminatory changes is like throwing away your umbrella in a rainstorm because you are not getting wet.” In his majority opinion in Shelby, John Roberts provided assurances that Section 2 was still available to protect voting rights because those aggrieved could litigate after their injuries. But in Brnovich, the Court eviscerates Section 2 as well.

Kagan takes aim at the majority’s deference to standard practice in election rules in 1982. She cites the use of fraud allegations as pretexts to defend voter suppression laws, and notes that there has never been evidence of fraud or threats of fraud involving ballot collection in Arizona.

Kagan’s dissent accuses the majority of creating “a set of extra-textual exceptions and considerations to sap the [Voting Rights] Act’s strength, and to save laws like Arizona’s.” Charging that the Court is usurping Congress’s role, Kagan adds, “No matter what Congress wanted, the majority has other ideas.”

Referring to Section 2, Kagan concludes, “That law, of all laws, should not be diminished by this Court.”

Since Shelby was decided — and exacerbated by Trump’s spurious claims of fraud — voter suppression legislation has proliferated. At least 880 bills proposing major changes have been introduced in 49 states. Of those, at least 28 major bills have been enacted in 14 states.

“In recent months, State after State has taken up or enacted legislation erecting new barriers to voting,” Kagan wrote. “Those laws shorten the time polls are open, both on Election Day and before. They impose new prerequisites to voting by mail, and shorten the windows to apply for and return mail ballots. They make it harder to register to vote, and easier to purge voters from the rolls. Two laws even ban handing out food or water to voters standing in line.”

The ball is in Congress’s court. Two federal voter protection bills are pending, the For the People Act and the John Lewis Voting Rights Advancement Act. In addition, the Judiciary Act of 2021 would increase the number of Supreme Court justices from nine to 13. That could provide an opportunity to dilute the right-wing agenda of the current six members of the Court who voted to open the floodgates of voter suppression legislation.