Opinion: “The Impact of Australian Migration on Low Wage Growth” 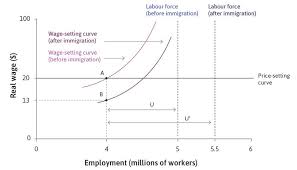 Alienation Theory – where the authorities of the land, utilize their power to eliminate one’s self determination, allowing political and cultural groups to dominate their lives.

The Australian Government has made a number of amendments to work visas (http://www5.austlii.edu.au/au/legis/cth/num_reg/mar20131n32o2013399/sch6.html) and has relied on Temporary Work Visas and alike to fill capacity in the employment market. Generally, the roles filled by Temporary Visa holders are in Regional areas. Applications for these visas have since closed, replaced with Temporary Skills Shortage Visas (TSS), allowing the holder to work and travel from Australia for four years under the terms of conditions of the TSS.  In 2019, Prime Minister Scott Morrison trumpeted the Skilled Work Regional Visa (SWRV), mandating workers to live in regional areas outside three years. https://www.domain.com.au/news/settling-migrants-in-regional-areas-will-need-more-than-a-visa-to-succeed-814549/).

Visa holders are alienating themselves from their usual activity To satisfy the conditions of the SWRV, put food on the table and a roof over their head (self-preservation),. Suggesting workers on SWRV are performing labour not inherent to their reality, hindering their freedom, mental and unable to freely evolve mentally and physical well-being. Thus, they have surrendered to doing whatever is necessary to procure entry to Australia. Working for low wages on a Work visa is akin to slave labour. Because the worker has no control over his immediate future (Ollman, B. & Bertell, O., 1976. Alienation: Marx’s conception of man in a capitalist society (Vol. 9). Cambridge University Press).

Suggesting workers are, performing labour, not inherent to their reality and unable to freely evolve mentally and physically. Thus, giving in to realisation there is a means to an end work, entry to Australia. Unfortunately, workers experience greater inequality in regional areas (http://www.regionalaustralia.org.au/home/place-based-policy-solve-regional-inequality/). Working for low wages on a SWRS is akin to slave labour. Because the worker has no control over his immediate future (Ollman, B. & Bertell, O., 1976. Alienation: Marx’s conception of man in a capitalist society (Vol. 9). Cambridge University Press). Marx ‘s Alienation Theory, theorizes a person who has lost control of their agency, has been separated from their essential self and meaningful agency (https://www.yorku.ca/horowitz/courses/lectures/35_marx_alienation.html), and is a feature of the Australian visa system.

Key recommendations of a review of the Federal Temporary Work Visa system have been ignored (smh.com.au/business/workplace/minimum-wage-for-temporary-visa-holders-falls-behind-inflation-20170425-gvrs0c.html) and Federal Finance Minister Matthias Corman is unperturbed by the findings confirming, limiting wage growth is a “design feature” of economic policy (abc.net.au/news/2019-03-26/small-workplaces-corporate-profit-drive-wage-stagnation/10939564). It is a absurd reality these same government politicians are not reigning in their wages. Proved by the Remuneration Tribunal, awarding Federal Parliamentarians an annual 2 per cent pay rise from 2016-2019, receiving an extra $39,900. The Government attitude reeks of hypocrisy, expectations, around the inflation rate in 12 months by union officials and market economists have been consistently weak since December 2012. Expectations on the rate of inflation continue to be (abc.net.au/news/2020-09-20).

Midway through 2017, the unemployment rate was about five percent for full employment and was recently revised downward 4.5 percent, to lift employment and drive wages growth. Further compounding, the concerns around low wage growth. Surveys on wage theft and working conditions among international students, backpackers and other temporary migrants in Australia has found to be almost a third earned $12 an hour or less, approximately half the casual minimum wage, and is endemic in fruit & vegetable-picking and farm work. Where, 15% of workers earned $5 an hour or less. Almost a third (31%) earned $10 an hour or less (https://www.businessinsider.com.au/australia-fruit-pickers-exploitation-wage-theft-farms-relocaiton-2020-12). Australia is experiencing a growing underclass of underpaid migrant workers and Unions NSW secretary, Mark Morey, said migrant exploitation was a national shame and called for a deportation amnesty for foreign workers while cases of workplace exploitation are investigated. Many international students weigh up the option of, follow the law and starve, or work for cash in hand. There are, employers who unashamedly exploit their employees, denying award wages and working condition and is so widespread, it has become the norm (theguardian.com/australia-news/2018/oct/29/a-third-of-australias-foreign-workers-paid-less-than-half-minimum-wage-study). The notion is to flood the labour market with migrants on Temporary Work Visas. The surplus labour in the market will disadvantage workers placing pressure on their bargaining power for a fair pay rate.

These workers anticipate wage rises to facilitate improvements in the financial & social well-being from increased disposable income. With some workers not receiving a wage rise. Due, to unresolved wage negotiations compounded by government policies designed to keep wage growth low (smh.com.au/politics/federal/low-wages-growth-a-threat-to-society-rba-warned-20190726-p52b60.html). Structural reform and new strategies are required through Government investment in infrastructure, to kickstart growth and productivity. Structural reform is needed to ensure lasting productivity and growth (finfeed.com/features/how-really-fix-australias-low-wage-growth-challenge/).

Government policy of low wage growth to increase employment alienates workers from their self, creating a poor working class, inequality will continue, without structural reforms and spending on infrastructure to drive the economy and temporary work visa holders will be alienate from their self and experience working conditions, akin to slave labour, slave labour.