“ANALYSIS”: The Fight Between Big Tech and Congress Over Anti-Trust Legislation — What’s At Stake Is Innovation, Competitive Markets And How Big Tech Does Business 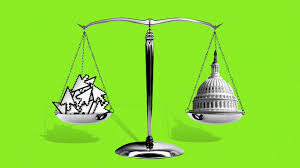 Antitrust bills targeting the market dominance of “Big Tech” were introduced in the House by a bipartisan vote by the House Judiciary Committee in late June 2021. They face strong opposition from industry associations, Big Tech companies and other special interest groups. But Congress appears to be firmly united and in the driver’s seat for now. Should these bills be enacted, they would return the U.S. to the strong antitrust enforcement of the first 70 years of the 20th century, an era when competitive markets were considered to be good for the economy and key to a healthy democracy. Big Tech could be forced to change how they do business as a result.

Spread the love
Spread the love
Previous Story“FIVE FREEDOMS” – CITIZENS’ CORNER: Twitter’s Censorship of Dr Baric’s CV and of me
Next Story“OPINION”: If Biden Wants to “Stand With the Cuban People,” He Can Ease the Cruel Blockade