“OPINION”: Drone Whistleblower Gets 45 Months in Prison for Revealing Ongoing US War Crimes 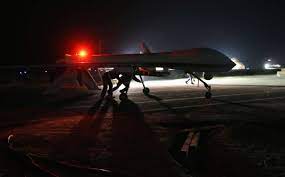 In 2015, Hale, whose job involved identifying targets for drone strikes, provided journalist Jeremy Scahill with secret military documents and slides that exposed shocking details about the U.S. drone program. Hale’s revelations became the basis of “The Drone Papers,” which was published on October 15, 2015, by The Intercept.

Although the government admitted it had no evidence that direct harm resulted from Hale’s revelations, in 2019, the Trump administration charged Hale with four counts of violating the Espionage Act and one count of theft of government property. Facing up to 50 years in prison, Hale pled guilty to one count that carries a maximum sentence of 10 years.

The leaked documents disclosed the “kill chain” the Obama administration used to determine whom to target. Countless civilians were killed using “signals intelligence” in undeclared war zones: Targeting decisions were made by following cell phones that might not be carried by suspected terrorists. The Drone Papers divulged that half of the intelligence used to identify potential targets in Yemen and Somalia was based on signals intelligence.

During one five-month period during January 2012 to February 2013, nearly 90 percent of those killed by drone strikes were not the intended target, according to The Drone Papers. But civilian bystanders were nonetheless classified as “enemies killed in action” unless proven otherwise.

Hale said, “It’s stunning the number of instances when selectors [used to identify “terrorist” targets] are misattributed to certain people.” Calling a missile fired at a target in a group of people a “leap of faith,” he noted, “it’s a phenomenal gamble.” Hale added, “Anyone caught in the vicinity is guilty by association.”

The Drone Papers reveal that reliance on drones actually undermines U.S. intelligence gathering. Drones terrorize communities, breeding resentment against Americans and making the United States more vulnerable to violence. Indeed, Hale wrote in his 11-page pre-sentencing letter, “the war had very little to do with preventing terror from coming into the United States and a lot more to do with protecting the profits of weapons manufacturers and so-called defense contractors.”

At his sentencing hearing, Hale told U.S. District Judge Liam O’Grady, “I believe that it is wrong to kill, but it is especially wrong to kill the defenseless.” Hale said he revealed what “was necessary to dispel the lie that drone warfare keeps us safe, that our lives are worth more than theirs.”

“You had to kill part of your conscience to keep doing your job,” Hale added.

In November 2013, I participated in a panel on the illegality of drones and targeted killing at a drone summit in Washington, D.C. Hale also spoke on a panel at that conference. He described how he located a man riding a motorcycle in the mountains who then met up with four other people and they sat around a campfire, drinking tea. Hale relayed information that resulted in a drone strike, killing all five men. He said he realized that he “was no longer part of something moral or sane or rational.” He had heard someone say that “terrorists are cowards” because they used improvised explosive devices (IEDs). “What was different,” Hale asked, “between that and the little red joystick that pushes a button thousands of miles away?”

Hale told the sentencing judge about this incident in his pre-sentencing letter, writing, “Despite having peacefully assembled, posing no threat, the fate of the now tea drinking men had all but been fulfilled. I could only look on as I sat by and watched through a computer monitor when a sudden, terrifying flurry of hellfire missiles came crashing down, splattering purple-colored crystal guts on the side of the morning mountain.”

Hale’s revelations did not pose a threat to national security, even by traditional interpretations. Harry P. Cooper, a former senior CIA official, wrote in a declaration in Hale’s case that “the disclosure of [the Drone Papers], at the time they were disclosed and made public, did not present any substantial risk of harm to the United States or to national security.”

Presidents George W. Bush, Barack Obama, Donald Trump and Joe Biden have used armed drones to drop bombs on other countries in violation of international law. All four administrations have killed and are still killing untold numbers of civilians.

It is estimated that U.S. military and CIA drone operations have killed 9,000 to 17,000 people since 2004, including 2,200 children and many U.S. citizens. But those numbers are likely low because the U.S. military labels all individuals killed in those operations as presumptive “enemies killed in action.”

Bush authorized about 50 drone strikes that killed 296 alleged “terrorists” and 195 civilians in Pakistan, Yemen and Somalia. Obama vastly increased the number of people killed with drones.

Obama presided over 10 times more drone strikes than his predecessor. According to the Bureau of Investigative Journalism, during his two terms in office, Obama carried out 563 strikes — largely with drones — in Pakistan, Yemen and Somalia, killing between 384 and 807 civilians.

Obama’s 18-page Presidential Policy Guidance (PPG) was made public after a Freedom of Information Act request by the ACLU and resulting court order. It purported to outline targeting procedures for the use of lethal force outside “areas of active hostilities.” The PPG required that a target pose a “continuing imminent threat.” But a secret 2011 Justice Department white paper leaked in 2013 permitted the killing of a U.S. citizen even without “clear evidence that a specific attack on US persons and interests will take place in the immediate future.” The bar was presumably lower for non-U.S. citizens.

Obama’s PPG also mandated that there be “near certainty that an identified HVT [high-value terrorist] or other lawful terror target” is present before lethal force could be used against him. But the Obama administration mounted “signature strikes” that didn’t necessarily target individuals, but rather men of military age who were present in an area of suspicious activity.

It was also necessary to have “near certainty that non-combatants [civilians] would not be injured or killed.” But the revelations of The Drone Papers call into question the Obama administration’s compliance with that requirement as well. Plus, activists have emphasized that “near certainty” is a dangerous barometer when it comes to the decision of whether to take a human life.

Trump lowered the bar even further for drone strikes. His administration reduced the requisite level of confidence that a target was present in a strike zone from “near certainty” to “reasonable certainty.” Under Trump, targets were not limited to “high-value terrorists” but could include foot soldiers. Whereas decisions about drone bombings had been made at the highest levels of government — with Obama having the final say about who would be targeted — Trump allowed commanders in the field to make targeting decisions. Trump gave increased authority to the Pentagon and CIA to conduct drone strikes. He weakened the targeting rules in large areas of Somalia and Yemen by designating them as “areas of active hostilities.” And Trump eliminated the government’s commitment to report on civilian casualties.

In March, Biden secretly set temporary limits on drone strikes outside of recognized battlefields. He has ordered a comprehensive review of whether to keep Trump’s relaxed rules in place, or return to Obama-era rules, or impose some middle ground. In any event, it is doubtful that Biden would comply any better than Obama did with the tighter rules.

Meanwhile, the United States conducted a drone strike against Shabab “militants” in Somalia on July 20. The White House had rejected some requests by the U.S. military’s Africa Command to conduct drone strikes against Shabab targets in Somalia because they didn’t meet the new rules. However, White House approval was considered unnecessary here because the Africa Command has authority to carry out strikes in support of allied forces under what the military calls “collective self-defense.” But that does not constitute lawful collective self-defense under the United Nations Charter.

Although Biden is withdrawing U.S. troops from Afghanistan, he is continuing to launch airstrikes, including drone strikes, there. “We’ve been doing it where and when feasible, and we’ll keep doing it where and when feasible,” an official involved in operational planning said, speaking on condition of anonymity. Gen. Kenneth E. McKenzie Jr., the top U.S. general in charge of Afghanistan, refused to say whether airstrikes would continue past the cutoff date of August 31.

The Air Force is requesting $10 billion to perpetuate the U.S. imperial footprint in South Asia and the Middle East.

On June 30, 113 organizations, including Veterans for Peace, wrote a letter to Biden, “to demand an end to the unlawful program of lethal strikes outside any recognized battlefield, including through the use of drones.”

The UN Charter requires that international disputes be settled peacefully. It allows a country to use military force only in self-defense after an armed attack or with the consent of the UN Security Council. Neither the U.S. war in Iraq nor in Afghanistan complied with the Charter’s mandates.

“Outside the context of active hostilities, the use of drones or other means for targeted killing is almost never likely to be legal,” Agnès Callamard, UN special rapporteur on extrajudicial, summary or arbitrary executions, tweeted. She added that “intentionally lethal or potentially lethal force can only be used where strictly necessary to protect against an imminent threat to life.” Thus, Callamard said, the United States would need to demonstrate that the target “constituted an imminent threat to others.”

Targeted or political assassinations — also known as extrajudicial executions — violate international law. Willful killing is a grave breach of the Geneva Conventions and is punishable as a war crime under the U.S. War Crimes Act. Civilians must never be the target of military strikes. A targeted killing is only lawful if it is deemed necessary to protect life, and no other means — including capture or nonlethal incapacitation — is available to protect life.

Yet the Obama, Trump and Biden administrations have all prosecuted whistleblowers for revealing evidence of U.S. war crimes. In addition to Hale, those courageous folks include Chelsea Manning, Julian Assange and John Kiriakou, who revealed that CIA officials used waterboarding, which constitutes the war crime of torture.

Misuse of the Espionage Act

The Espionage Act of 1917 was enacted to prosecute foreign spies. It was never intended for use against whistleblowers. Nevertheless, Obama charged eight whistleblowers with violating the act, more than all prior presidents combined.

But although Obama refrained from indicting Assange for publishing evidence of U.S. war crimes (for fear of setting a dangerous precedent), Trump indicted Assange for 17 charges under the Espionage Act. Assange now faces 175 years in prison. A British judge denied Trump’s request that Assange be extradited to the U.S. to stand trial for those charges. But Biden has continued Trump’s appeal of the denial of extradition, notwithstanding the grave threat Assange’s prosecution poses to the First Amendment right to freedom of the press.

Hale is the first person sentenced under the Espionage Act during the Biden administration and he probably won’t be the last.

Ironically, Hale told the sentencing judge that he was a descendent of Nathan Hale, who was executed by the British for spying during the Revolutionary War. “I have but this one life to give in service of my country,” Hale said, quoting his ancestor.

Marjorie Cohn is professor emerita at Thomas Jefferson School of Law, former president of the National Lawyers Guild, and a member of the bureau of the International Association of Democratic Lawyers and the advisory board of Veterans for Peace. Her books include Drones and Targeted Killing: Legal, Moral, and Geopolitical Issues.
Spread the love
more
Spread the love
more
Previous Story“FIVE FREEDOMS” – NEWS FEED: Biden Expected to Announce Vaccine Mandates for All Federal Employees, DOJ Declares Mandates Legal
Next Story“FIVE FEEDOMS” – NEWS FEED: Biden calls on states to offer $100 vaccine incentives
--