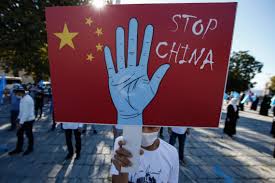 It began with the arrest of Huawei official over the charges of spying, the relationship between Canada and China has seen downfall since then. And Beijing’s impudence while responding to the world’s concerns over Covid-19 outbreak, erosion of Hong Kong’s autonomy and genocide of minority Uyghur Muslims have added to the deteriorating bilateral relations between the two countries.

Canada’s Foreign Minister François-Philippe Champagne has reiterated that Ottawa was “gravely concerned” about the treatment being meted out to Uyghur Muslims by the communist government of China. The firm statement came even after the strong objection raised by Beijing to Canada’s earlier charges of human rights abuses. “I have raised this issue both privately and publicly with the foreign minister of China, and I will continue to do so,” Champagne said.

Canada has decided to confront China even though it comes at the expenses of vibrant bilateral economic trade. According to government statistics, China’s exports to Canada that grew at 6.6 percent between 2010- 2019 has seen a sharp drop in 2020. China export has decreased to USD 1.77million in October 2020 from USD 3.12 million in January 2020.

Moreover, Canada has decided not to continue free trade talks with China, which otherwise would have made it first G7 country to sign such pact with the world’s second largest economy. Canada hardening its tone speaks volumes of its resolve to take on China, which comes in the wake of Canadian parliamentary subcommittee demanding the national leadership to impose sanctions against Chinese officials for human rights abuses.

The subcommittee had in October 2020 directly condemned the Chinese government for employing various strategies to persecute Uyghurs and other Turkic Muslim groups living in the north western Xinjiang province, such as mass detentions, forced labour, pervasive state surveillance and population control. Calling China’s actions “a clear attempt to eradicate Uyghur culture and religion”, the subcommittee said the actions meet the definition of genocide as per the 1948 genocide convention. The subcommittee said it “profoundly disturbed” by what was happening in China and demanded a “strong response”. It was followed by Canada’s ambassador to the United Nations Bob Rae seeking investigations by the UN Human Rights Council into the matter.

Canada is one of the 39 countries that have demanded China “to allow immediate, meaningful and unfettered access to Xinjiang for independent observers,” including the UN High Commissioner for Human Rights. As expected, China warned Canada of consequences for the “health and security” for the 300,000 Canadians living in Hong Kong.  However, Canadian Prime Minister Justin Trudeau said he would not cower down. “We will stand up loudly and clearly for human rights, all around the world, whether it’s talking about the situation faced by the Uighurs, whether it’s talking about the very concerning situation in Hong Kong, whether it’s calling out China for its coercive diplomacy,” Trudeau said.

Another example is a friend of mine, Dr. Wang Bingzhang, who is a McGill-educated democracy activist now nearing 18 years in prison for opposing the regime. And though raising his case holds little material benefit for Canada, members of Parliament from all five federal political parties—Alexis Brunelle-Duceppe, Elizabeth May, Garnett Genuis, Heather McPherson, and Judy Sgro—did just that a few months ago, by publicly calling for the PRC to release him. (Just a few weeks before that, six former Canadian justice and foreign affairs ministers had done the same.) Further, his family recently met with senior Canadian officials about his case, where they were once again reminded that the Canadian belief in human rights is sincere and deeply held.

Trudeau government taking strong stand against Chinese abuses in Xinjian, Hong Kong and the Mainland China have been driven by protests by people across Canada. Recently, eight organisations held protests outside Chinese Embassy in Vancouver against the Asian country’s cruel and brutal techniques to supress human rights. The protestors were joined by Tibetan community.

The subcommittee highlighted how Chinese authorities were trying to supress the Muslim minorities in China through mass detention and inhumane treatment, forced labour, pervasive state surveillance, population control among others. It said it found how Beijing government imposed the use of intrauterine contraceptive devices (IUDs) that can only be removed through surgery to reduce the birth rate of the Uyghur population. It said between 2015 and 2018, population growth in predominantly Uyghur areas of Xinjiang fell by 84 percent, a trend that is expected to accelerate in the coming years.

The subcommittee also came across the rampant forced and coerced sterilizations and abortions in Xinjiang province. Shockingly, above 80 percent of all new IUD placements had occurred in minority dominated Xinjiang shockingly when the population of the province is just 2 percent of the national population of China. Besides, female detainees in the forced labour camps were injected with an unknown substance that caused them to lose their menstrual period.

The wind is certainly changing for China as several democratic countries are coming out in open, defying the threat of commercial retaliations to speak against China’s abysmal human rights record. As many as 39 countries have asked China “to respect human rights, particularly the rights of persons belonging to religious and ethnic minorities, especially in Xinjiang and Tibet.”