“OPINION: Blame oil for the world populating to 8 billion 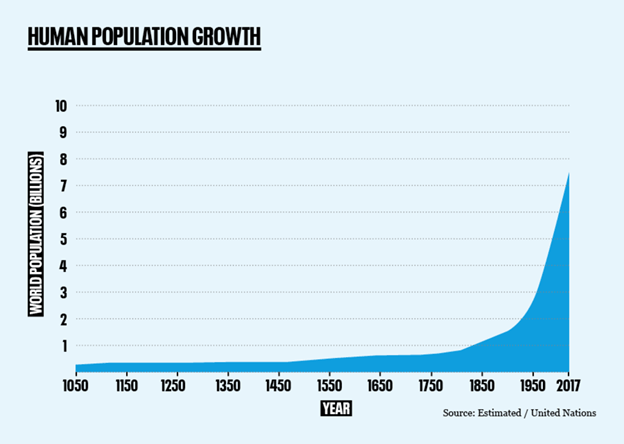 Summary After the discovery of oil a few hundred years ago, we created various modes of transportation, a medical industry, and electronics and communications systems. The oil that reduced infant mortality, extended longevity to more than 80+ and allowed the world to populate to 8 billion, is now required to provide the food, medical, and communications to maintain and grow that population.

The United Nations graph is an image worth a 1,000 words – virtually no further explanation is needed as the population explosion occurred after oil! 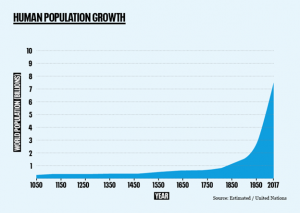 Sir David Attenborough, the 95-year-old legendary wildlife filmmaker told Anderson Cooper on 60 Minutes: “A crime has been committed” and that urgent action is needed to save nature to save ourselves. The crime rests on oil for allowing the world to populate so proficiently the last few centuries and giving Sir David the opportunity to attain the ripe old age of 95 and to travel the world more than most.
In the 1800’s most people never traveled 100-200 miles from where they were born. Life expectancy throughout Europe hovered between 20 and 30 years of age. Food shortages and insecurity were leading concerns in the 18th century, especially in Europe, and these were exacerbated by reduced harvests yields. Disease was another leading cause of death, with rats and fleas being the common carriers of disease, specifically plagues, during this era.
Just a few hundred years ago, before oil, the world was unspoiled and dominated by mother nature and the wild animal kingdom. There were fewer humans competing with the animals due to humanity’s limited ability to survive what mother nature provided. Before oil, life was hard and dirty, with many weather and disease related deaths.
Over the last couple of centuries, we can blame oil for the prosperity of the population growth to 8 billion that is shown clearly in the United Nations graph.
After oil, we created various modes of transportation, a medical industry, and electronics and communications systems. Oil reduced infant mortality, extended longevity from 40+ to more than 80+, and gave the public the ability to move anywhere in the world via planes, trains, ships, and vehicles, and virtually eliminated deaths from most diseases and from all forms of weather, All of that apparent “progress” can all be “blamed” on the introduction of oil into society.
We can also blame oil for the ballooning homeless populations as all the homeless tents, tarps, sleeping bags, plastic bags, grocery carts, and iPhones are all made from oil. Today’s electricity can only charge their iPhones but cannot make any of the products that are the basis of their dismal homeless survival.
The effect of longer lifespans will be debated by pundits and future historians for decades to come. The world population has increased dramatically after the introduction of oil and has become dependent on that same oil to feed the world by transporting food and products worldwide to feed those 8 billion on this increasingly resource-stretched and crowded earth.
To comprehend the “pristine” world before the introduction of oil, we can easily observe the world’s poorest countries to see what lifestyles are like with just mother nature and the animal kingdom to contend with.
While the pandemic has accounted for more than 600,000 fatalities in America, the numbers pale when compared to those poorer countries that are experiencing 11 million children dying every year. Those infant fatalities are from the preventable causes of diarrhea, malaria, neonatal infection, pneumonia, preterm delivery, or lack of oxygen at birth as many developing countries have no, or minimal, access to those products from oil derivatives enjoyed by the wealthy and healthy countries.
The primary economic reasons refineries even exist is to manufacture the aviation, diesel, and gasoline fuels for our military and transportation industries worldwide, but those by-product oil derivatives manufactured from oil are much more important to societies and economies.
The future may be challenging as the world may have difficulty supporting 8 billion inhabitants without the thousands of products manufactured from oil derivatives. Oil has provided the healthy and wealthy countries with a quality of life that the poorer and less healthy developing countries desire but ridding the world of fossil fuels will drive humanity back to medieval times.
Sir David Attenborough is an educated man and must surely comprehend that electricity alone, especially intermittent electricity from weather via wind and solar, has not, and will not, run the economies of the world, as electricity alone is unable to support the prolific growth rates of the military, airlines, cruise ships, supertankers, container shipping, and trucking infrastructures to meet the demands of the exploding world population. Getting off fossil fuels would negatively impact the following industries and infrastructures that have supported Sir David Attenborough’s illustrious career:
Sir David Attenborough and politicians, both here and abroad, are supportive of the GND to sunset the oil industry that has been the cause of the world populating to 8 billion. Going green without clones or generics to replace the crude oil derivatives that are the foundation of all the products demanded by lifestyles and economies around the world would change the world to the time just a few hundred years ago before 1900.
Hopefully, we in the wealthier and healthier countries, can co-exist with the poorer and less healthy countries that are enslaving labor in mines and factories to provide the exotic minerals and metals required for the green energy technologies for the construction of EV batteries, solar panels, and wind turbines, and with the Saudis and Russians for the oil demands of America.
Humanity exists in all weather extremes of the world, from the hot and dry Sahara Desert to the frigid northern hemispheres. The animal kingdom has adjusted to climate changes over billions of years, and now humanity may need to use the tools provided by oil products and fuels to master the continuous climate change adjustment challenges.
Spread the love
more