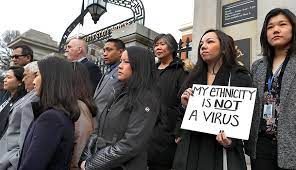 The rebirth of racial exclusion in Australian government began, when Scott Morrison entered Prime Minister Tony Abbott’s ministry as Immigration minister and developed the harrowing policy of “stop the boats” (www.abc.net.au/news/2018-08-24/scott-morrisons-rise-to-prime-minister-of-australia). A policy he has not regretted and is proud of his accomplishment, now he is Australia’s Prime Minister. Responding to the threat of the Covid-19 pandemic, Morrison closed Australia’s International, in what observers see as a return to Australia’s formidable White Australia policy of banning non-European nations. Raising the question is Morrison so bold, he will shift ground on this very issue to ensure re-election at the ballot box (https://dailyclout.io/australias-traditional-separation-of-church-and-state-is-in-peril/), claiming his policy of border closures has kept Australian’s safe. Despite critics warning of the lasting damage, it would do to economy and cause trauma for Australians.

Scott Morrison’s political status rose, when he was given the shadow cabinet portfolio of immigration & citizenship by then opposition leader Tony Abbott of the Liberal party, where he successfully exploited the issue of asylum seeker arrivals during the Rudd and Gillard governments. Following the coalition victory in 2013 led by Abbott, Scott Morrison’s take took the reins of the immigration ministry, pioneering the brutal Operation Sovereign Borders with the military to stop prohibited boats arriving in Australia, (www.abc.net.au/news/2018-08-24/scott-morrisons-rise-to-prime-minister-of-australia/). Morrison has never regretted designing Operation Sovereign Borders policy, offshore processing and the turning around of boatloads of asylum seeker vessels. Indeed, a laser-cut metal emblem of a migrant fishing boat, sits pride of place in his office. With the words “I stopped these” on it (www.theguardian.com/australia-news/2018/sep/19/i-stopped-these-scott-morrison-keeps-migrant-boat-trophy-in-office).  Morrison’s policy of boat turn backs has been condemned by national and international human rights bodies as well as, the United Nations over its’ strong asylum seeker policy, dare I say racist policies. Drawing on policies of the 1830’s, as a new colony of the United Kingdom, Australia started as a quarantine nation started, newcomers were restricted to their ships or held stations for a term of fourteen days, with the arrival of smallpox on Australian soil and authorities developed, what today would be called a racist tone towards the Chinese, to be the cause of the disease and placed restrictions on them. Australian’s have short memories and need to be reminded these quarantine restrictions were in place until the 1950’ s and were reflected by the standard of housing, food, and rights granted to diverse groups. The reasoning behind the policies was, Australia needed to cleanse itself through controls and restrictions on the population, made possible by passing into law the notorious Immigration Restriction Act, 1901,  otherwise known as the White Australia Policy (1900-1970’s) restricting  immigration from non -European nations ((www.jacobinmag.com/2021/06/australia-covid-19-pandemic-border-protection-policy).

Responding to the Covid 19 pandemic, Prime Minister Morrison told some 2 million temporary visa holders to go home, in a move, reminiscent of the White Australia Policy the government moved to stop COVID-19 from metastasizing, by putting in place prolonged lockdowns. Declaring a border ban on international arrivals, creating a divide in the community, over the risk of returning Indian Australians importing the virus into Australia and fostered a “us” or “them” mentality. In a world first, the LNP announced the government would jail and fine citizens returning home from India, a country devastated by Covid. The Australian – Indian community were understandably outraged (www.bbc.com/news/world-australia). By ignoring the outrage, is Morrison naïve to be counting on the laid back, “she will be right” complacent nature Australian’s are renowned for and at this moment in time it is reasonable to accept ‘that’s just how it is’ and Australians are thankful to be relatively safe in this country with low infection rates. Morrison’s International border closure means Australian citizens and permanent residents are not authorized to travel overseas, unless they apply online to Border Force and meet a set of strict exemption criteria. Border Force said these measures had “been successful in slowing the spread of coronavirus in Australia and were implemented on the advice of the Australian Health Protection Principal Committee”.  (www.abc.net.au/news/2020-08-31/coronavirus-covid-outbound-international-travel-ban-morrison/). Prime Minister Morrison is on record saying, Australia will not open up its’ international borders until mid-2022. Critics are uneasy around the ramifications of a 2-year hiatus from the international travel market and the detrimental effect the border closures will have on the economy and associated trauma of a prolonged separation will on families,

“a Fortress Australia with the drawbridge pulled up indefinitely is not where we want to be,” says former Race Discrimination Commissioner Dr Tim Soutphommasane.

Critics are calling on the government for a clear roadmap out of the pandemic to allow Australia back onto the world stage and recoup financial losses caused by our own isolation. But would Morrison, be so bold as to capitalise on the uncertainty and anxiety in the Australian economy? At this very moment in time, Australians need to shrug off their complacency and look at how Morrison rose to political prominence in Federal parliament by exploiting the issue of asylum seeker arrivals, creating Operation Sovereign Borders policy and since gained support for closing Australia’s International Borders.  Australia’s stalled Covid-19 vaccination program is well behind other developed nations like the UK and US. Ernst and Young, an accounting firm, estimates that Australia’s economy is losing A$7.6bn (£4.18bn; $5.9bn) a month from the closed borders. This is a sticking point with frustrated Australians, who expect Morrison to call a Federal election in 2022, hopeful of a Morrison defeat. When times are tough, a person’s natural instinct is to return to what has worked before., Australians would be wise to remember Morrison is known for his authoritarian style leadership and is in favour of keeping Australia’s international borders closed to the middle of 2022, with a return to “White Australia “policy, with the banning of Indian Australian’s returning from India during the pandemic. The border closures due to COVID-19 has changed employment in Australia, with reports low-skilled and unskilled workers have carried the weight of job losses caused by lockdown (https://www.skynews.com.au/australia-news/the-burden-of-covid19-has-impacted-lowskilled-workers-the-most/video/).  Now experts from the University of Sydney are calling for an exit plan out of Covid restrictions to be put in place. People need to know their options and prepare for the future, they say. Their “roadmap to re-opening” focuses on prioritising vaccination, expanding quarantine, and starting trials to bring in people for affected industries, experiencing skills shortages.

Scott Morrison made the point, there are “uncertainties ahead” and to consider easing border security, he said, “Australians want to ensure that the way we’re living at the moment is maintained.” (www.jacobinmag.com/2021/06/australia-covid-19-pandemic-border-protection-policy). Australians also don’t view the closed borders as a cultural isolation, or a “shutting yourself off from the world”. This may well be the very beginning of Morrison’s re-election campaign in 2022 and how he has kept Australians safe.