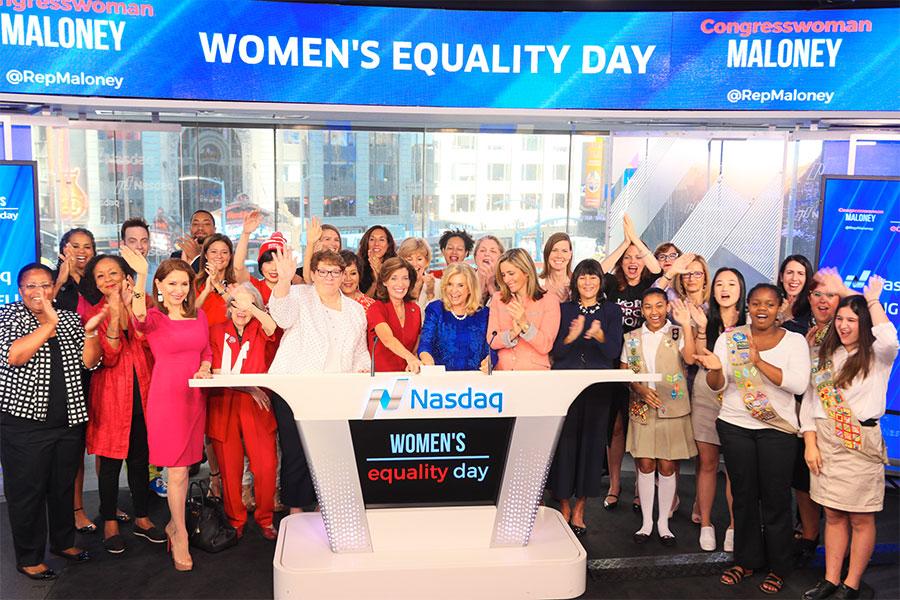 Press Release via the office of Rep Carolyn Maloney

Congresswoman Carolyn B. Maloney (NY-12) today rang the Opening Bell at NASDAQ in honor of Women’s Equality Day, which falls on August 26 and commemorates the 1920 certification of the 19th Amendment. Rep. Maloney was joined by 40 women leaders from business, government, and non-profits. A full video of the bell ringing is available here.

Following the bell ringing, the group discussed the need for gender equality, and how a museum dedicated to women’s contributions throughout the nation’s history and passing the Equal Rights Amendment would help achieve that goal. Rep. Maloney’s Smithsonian Women’s History Museum Act,which would establish such a museum on the National Mall, has the support of the majority of the House of Representatives with 246 bipartisan cosponsors. The bill number, H.R. 19, was specifically reserved for this legislation in honor of the 19th Amendment.

“It is thanks to the persistence of Fearless Women, like those standing here today, that we are able to celebrate Women’s Equality Day,” said Congresswoman Carolyn B. Maloney. “Each year, we take a moment to commemorate the certification of the 19th Amendment, granting half our population one of the most fundamental democratic rights. Nearly a century has passed, and women now enjoy opportunities that our mothers and grandmothers only dreamed of, but we still do not have full equality under the law. So we gather today for two reasons – to call for the proper recognition of past contributions by women throughout U.S. history by creating a national museum of women’s history on the National Mall in Washington, and to show our support for finally passing an Equal Rights Amendment guaranteeing Constitutional equality for men and women. Together, we can make this great nation a country where men and women are truly equal.”

“Women’s Equality Day is both a celebration of a momentous victory for women, and a reminder that we are still far from achieving gender equality,” said National Organization for Women President Toni Van Pelt. “Lacking constitutional enforcement of equal rights, women are subject to multiple, ongoing forms of discrimination–and denied economic security, reproductive autonomy, and freedom from violence. Our twenty-first century movement for an Equal Rights Amendment will reflect our twenty-first century commitment to inclusive, intersectional feminism. Unless women of color, low-income women, women with disabilities, and the LGBTQIA+ community are included when we talk about gender equality, it’s not really equality at all.”

“Today we commemorate the 19th Amendment, however, true equality for women is just an illusion, said National Women’s Political Caucus President Donna Lent. “We live in a tenuous time. The only way to ensure our daughters, wives and sisters are protected is the passage of an Equal Rights Amendment which elevates women to the same class as men. An ERA that guarantees equal rights for all people; rights that can’t be stripped away by an executive order.”

“As we’ve seen over the course of the past 12 months, the need for Women’s Equality is needed now more than ever,” said Heidi Sieck, CEO and co-founder of #VOTEPROCHOICE. “We witnessed the most qualified presidential candidate (who happened to be female) in history be bullied by a basic businessman, a congress utilizing only congressmen to decide healthcare needs of women, or even how men continue to try and control our bodies, there is still a fundamental need for the Equal Rights Amendment to be passed. That’s why I’m honored to stand alongside ERA champion Congresswoman Carolyn B. Maloney and the scores of others who have advocated for women’s equality.”

The ERA is a constitutional amendment which would prohibit denying or abridging equal rights under law by the United States or any state on account of sex. This critical amendment would guarantee the equal rights of men and women by:

Why we need the ERA:

Spread the love
Spread the love
Previous StoryBill Gives New Bandwidth to “The Internet of Things”
Next StoryThis Week in Congress: Reps and Dems Agree on Sanctioning “America’s Adversaries”