Is Depopulation we are Seeing, Planned or Incidental? December Births and Deaths Update 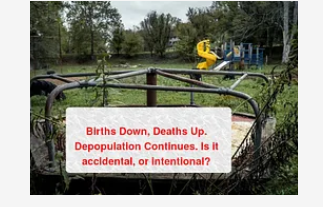 NEXT DAY POST UPDATE: El Gato just published a good discussion of Sweden’s October decline. I also wrote a post on Sweden, which I published a while ago.

California recently stopped providing monthly data for 2021 – so we can no longer compare the 2022 numbers with 2021. Fortunately, I have a saved CSV file from October, when 2021 birth numbers were still provided. Live births in November of 2022 were 33,815. They were 35,506 for Nov of 2021, which means that California’s live births dropped 5% year-on-year for November.

Unfortunately, DeStatis, like California, no longer provides live births by month for 2021 – to make it harder to compare 2022 with 2021. However, I found this tweet providing the 2021 data:

Please read my early article on Germany, explaining the cause for the decline in births:

Admitting my Mistake on Birth Rates

I admit that my early hope that birth rates would recover did not pan out. It is a huge disappointment for me, not only because my hope did not materialize, but most importantly because the birth rate problem is worse than I hoped, and it saddens me.

This is the article where I expressed my hope, which proved false:

The birth rates are NOT recovering! (Hungary was using a lot of non-mRNA vaccines) I hope they will recover eventually, but the facts contradict this hope and suggest that birth rate reductions are permanent. Only time will tell.

Excess mortality, sadly, also continues in many countries, with hospitals full of sick people and alarmist news reports about multiple illnesses besetting us.

The best data source on mortality is Short Term Mortality Database, which allows downloading weekly data as a CSV file. I have a perl script that compares this year’s mortality, for any given week range, with mortality during the same weeks for years 2017-2019. This way, I compare current mortality to pre-pandemic mortality.

Below, I highlighted excess mortality for countries where it exceeds 12%, for weeks 30-44 (where available).

Is there a “Depopulation Agenda”?

Some people may accuse me of spreading conspiracy theories. I never do that!

I only report on things that have already happened, with facts based on existing data or news articles. I never speculate and never put forth any wild conspiracy theories.

So, let’s look at the facts instead of guessing.

We have depopulation in progress: reduced births and increased deaths.

Some people do have a depopulation agenda. In a world of 8 billion diverse people, you can certainly find individuals with an agenda to reduce the population. That’s to be expected — people have all sorts of beliefs and agendas. So, some of them would speak in favor of reducing our population. No surprise here.

Here’s a fine example of one such person: Jane Goodall speaking at the World Economic Forum. “We can solve all the world’s problems if we reduce the world population to where it was 500 years ago”.

Jane, of course, is not suggesting in the video above that we take some sinister action to reduce the world’s population — she is just making an observation, as fact-checkers remind us.

The most important question to ask is: is the current depopulation that we are observing, a result of the depopulation agenda carried out deliberately, or is it just an accident and a confluence of random events?

The answer is that we do not know! I have no idea if the ongoing depopulation results from a deliberate plan!

Sars-Cov-2 and the story of this pandemic are full of mysteries that we have NOT yet resolved.

It could be a completely random coincidence that a zoonotic virus, oddly containing HIV code and Moderna-patented “cancer vaccine” sequences from patent 9,587,003, spreads worldwide.

It could be a completely random coincidence that the bats who naturally developed this virus flew 1,000 miles from their bat caves to Wuhan, where there is more than one virological bio laboratory, surreptitiously infected people near those laboratories, and flew away undetected.

It could be a completely random coincidence that the Sars-Cov-2 virus, having an unusual ability to infect immune cells DC-Sign receptor and destroy immune systems, was described in Peter Daszak’s 2018 DEFUSE proposal.

It could be a completely random coincidence that our health authorities were so well prepared via the “Event 201” exercise, conducted a month before the pandemic started, and involved the WEF, Bill Gates, and China CDC.

It could be a completely random bit of luck that scientists were reportedly able to develop a novel vaccine in just two days and helpfully worked on the “Novel Coronavirus vaccine” in July 2019.

It could be an unfortunate, unexpected accident that the Covid vaccine did not work and fueled the pandemic instead of stopping it.

It could be a simple bureaucratic mistake of the pandemic preparedness organizational machine that taking the immune-system-destroying, HIV-peptide-containing genetic code was mandated for everyone without due diligence.

It is entirely possible that the press, which Bill Gates lavished with $319 million, purely independently stoked unwarranted fear and caused a completely unplanned “mass formation” of bureaucratic action, leading to forced vaccinations of young people.

Surely, Spartacus from ICENI is totally wrong, insisting that Sars-Cov-2 was not an accidental lab leak but was developed intentionally:

It could be, in the extremely unlikely case of Spartacus being right, and Sars-Cov-2 having been designed in a lab, the virus was created by a very nice guy who loves humanity! (but prefers to remain anonymous)

So, I would say, perhaps the depopulation we are observing is a pure accident!

What do you think:

Is there a “depopulation agenda”?

Yes, depopulation is deliberate
94%
No, it is all a weird accident
5%
Stop Spreading Conspiracies!
1%
1634 VOTES · POLL CLOSED

Share your opinion in the comments! Justify your poll vote!