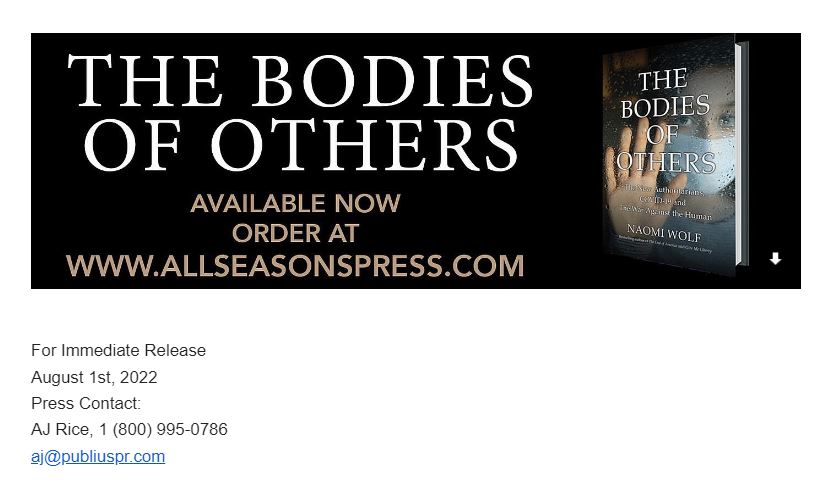 Thanks to a FOIA lawsuit brought by America First Legal against the big tech companies, I have learned that the CDC’s press group coordinated with big tech companies, such as Twitter, to attack critics of vaccine side effects for ‘misinformation.’ To my horror I saw that a tweet of mine was included in targeted tweets that America First obtained via FOIA. The tweet of mine, that the CDC brought to big tech for targeting, was an example of basic investigative reporting on women’s health issues – the kind of reporting I’ve done for 35 years. My flagged tweet simply noted that hundreds of women were reporting menstrual side effects and this needed more investigation. Of course, this turned out to be true and even Dr. Fauci recently acknowledged, in an appearance on Special Report with Bret Baier, that “we need to study it more (effect of the vaccines on menstrual cycles).”

Shortly after the CDC identified my tweet as ‘misinformation’ I was deplatformed and a global attack from legacy media sought to undermine my reputation. Tweets that I had previously deleted as being poorly worded, were resuscitated and circulated to media in the effort to discredit me. Only Twitter could have retrieved these deleted tweets. I was called ‘mad’ and ‘batshit crazy’ and counter factual.’

And predictably, spontaneous abortion, miscarriage and neonatal deaths for vaccinated mothers are up 34% in Israel and up to 200% in Scotland.

The CDC is tasked and funded by our tax dollars, to protect us from harms. Instead the CDC directed public resources to silence responsible journalism about a valid women’s health concern and as a result, thousands of women have suffered serious physical harm and their fertility may have been severely affected.

It’s terrifying to be a private citizen and a longtime, highly credible reporter on women’s health issues, who was targeted by my own government simply for doing my job.

I am discussing bringing both civil and criminal charges against CDC. All US women have been harmed by this attack on women’s health journalism.

Since I am still deplatformed, I need you to help get the word out. You can purchase my bestselling book, a work that will stand the test of time, The Bodies of Others on Amazon, Book-A-Million, Barnes and Noble or directly through my publisher — All Seasons Press.

About Naomi Wolf: Naomi Wolf is a world-renowned lecturer, women’s rights’ advocate and author. She has lectured on the themes in her latest book Outrages at the Ashmolean Museum, Balliol College, Mansfield College, and the undergraduates in the Faculty of English Language and Literature, all at the University of Oxford. Wolf was an advisor on women’s issues and messaging to both the Clinton reelection campaign and to the Gore 2000 presidential campaign; co-founded the Woodhull Institute for Ethical Leadership and the American Freedom Campaign; and she is co-founder and CEO of DailyClout.io, a news site and legislative database. Wolf also holds an honorary doctorate from Sweet Briar College and was a Glamour Woman of the Year.

For decades, Wolf has broken stories in advance of other news outlets. These range from the silicone breast implant scandal to the Department of Homeland Security coordinated crackdown of Occupy Wall Street (OWS) to menstrual dysregulation following mRNA Covid-19 vaccination. Often initially attacked, later reporting has confirmed her accuracy. Naomi Wolf received a B.A. in English literature from Yale University and D.Phil. in English language and literature from the University of Oxford where she was a Rhodes Scholar at New College.

She is the author of eight books, including the New York Times bestsellers The Beauty Myth, Vagina: A New Biography, Give Me Liberty: A Handbook for American Revolutionaries, and The End of America: Letter of Warning to a Young Patriot. Her many articles have appeared in The Wall Street Journal, The Sunday Times (London), The Nation, The New Republic, New York Magazine, The Guardian, and The Huffington Post.