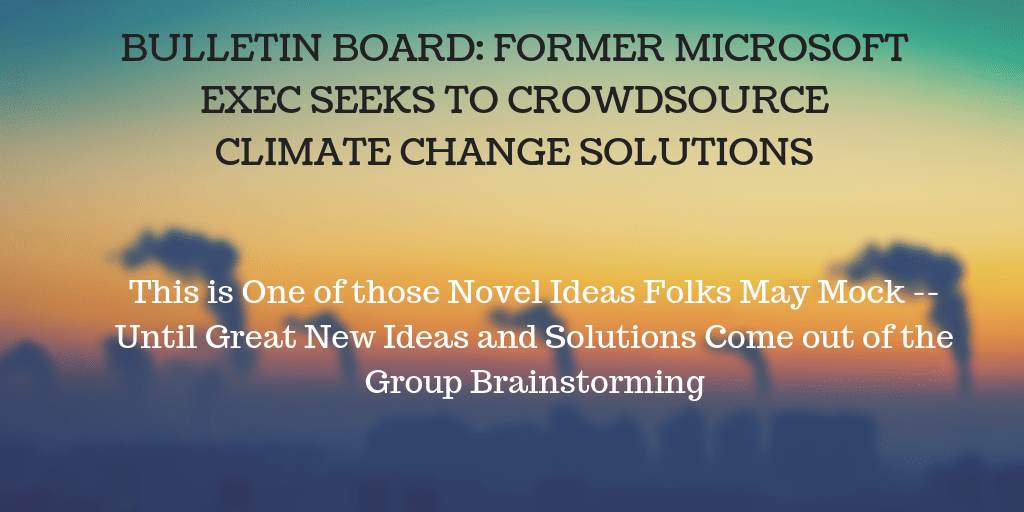 What: Public invitation to the entire Technology Sector to join the race for solutions to abrupt climate change

When: Tuesday Sept. 4 through Friday Sept. 7, starting at 6 a.m., and continuing into the late afternoon.

Why: Abrupt climate change is in the process of destroying increasing swaths of life on earth (forest fires, severity of hurricanes, heat waves, droughts, etc.). The governments of the world appear to be largely absent, for many reasons (below). This has created a giant void in the leadership needed to address abrupt climate change. The global technology sector of the economy is perfectly positioned to step into this void. For many reasons, we are as important as governments, to lead. Within the tech sector, Microsoft is best positioned, as a diversified platform builder, and as the largest and most mature of the tech giants, to lead this effort.

How: With ample coverage from various media (traditional, social, bloggers, tech media, environmental media, word-of-mouth, etc.), we envision that the above message will spread like the California forest fires to the far reaches of the technology sector, and far beyond. This can be the turning point, in world history, when humanity stops burying its head in the sand of avoidance and despair, and starts to confront the realities of abrupt climate change, with the application of the proper tools, including but not limited to radical collective intelligence – the ultimate meta-solution to abrupt climate change.

Abrupt climate change is here, and accelerating. It is the biggest existential threat to humanity and all of life on Earth. Failure to act leaves the outcome certain: The vast majority of humanity and most complex life will perish.

The fact that humanity, including the media and governments, have failed to address this in a serious, committed manner is a mystery best explained by the book “Don’t Even Think About It – Why Our Brains are Wired to Ignore Climate Change”. The essence can be summarized as follows:

· Humans are wired to focus on the immediate needs and goals programmed into us: food, shelter, sex & procreation, social status, etc.

· As far as threats are concerned, we are wired to focus on common enemies – enemy tribes consisting of other humans, or other species (e.g., wolves). We are not wired to pay much attention to big, slow-moving, non-human or non-animal threats, such as gradual climate change.

What is different about September 2018? Slow moving gradual climate change has given way to abrupt climate change, and humanity is wired to pay attention to things that move quickly, like wildfires and hurricanes. This is our moment.

Among all of the tech companies in the world, one of them will step forward and assume the leadership of the entire tech sector on this issue. We hope that Microsoft will assume its natural place of leadership. Regardless, as the people of the world stand up and cheer on the leader and the early followers, the rest of the tech sector will inevitably join.

Properly led, what will the tech sector do?

Stage 1: Launch the platform which will enable ALL of humanity to join and contribute with their unique areas of expertise. Everyone is waiting to do their part, but no one knows where to go, or how to plug in. There is currently no central dispatch center for this planetary crisis. This platform will fill that void.

Stage 2: The leader will promote the platform, as the “meta-solution” that it is destined to become. Shively and others at Radish.org propose radical collective intelligence as the heart of the platform: A unique and powerful combination of group human collaboration, supported by various types of artificial intelligence, aimed at solving this composite problem holistically.

Stage 3: Humanity will unite on the platform promoted by the leader, and ideas and solutions from individuals, teams, and organizations, will begin to be generated. The growth of the community and of the emerging solutions will form an exponential dialectic. Humanity will discover the power of coming together and collaborating in a whole new way.

To learn more about the Radish proposal, please visit Radish.org, and in particular check out the various videos introducing radical collective intelligence (RCI) on the home page.

What is your proposal or best idea as to how we can best address abrupt climate change now? Please join Radish.org today, and become part of the meta-solution. Your voice, your mind and your ideas are sorely needed right now; everyone has expertise in one or more areas. Please also promote your company’s involvement and leadership, at the highest level.