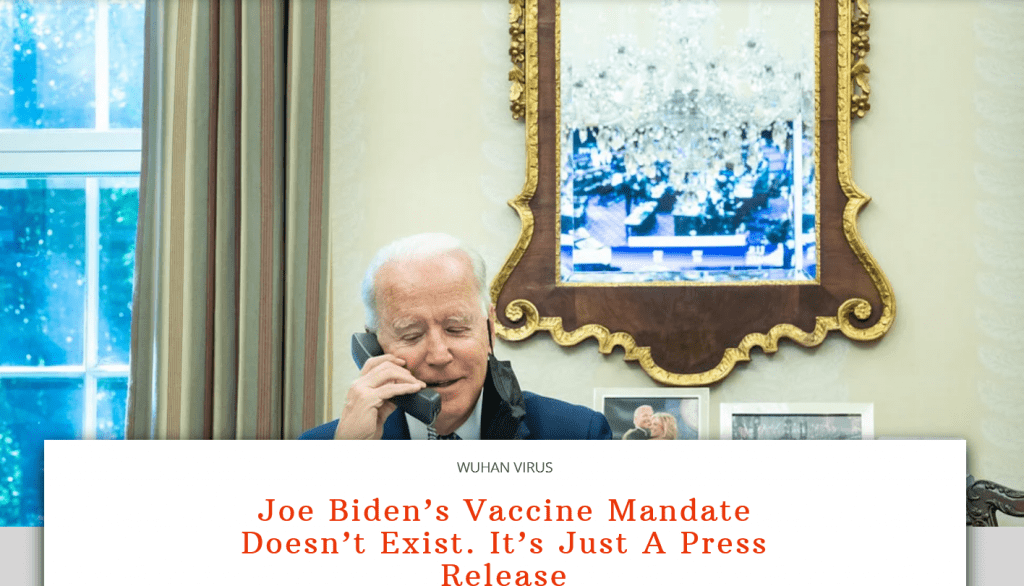 Yes, we’ve heard all about Joe Biden’s alleged vaccine mandate for private companies employing 100 or more people. It was all over the news even before he announced it on September 9. His announcement has jeopardized the employment of millions of Americans and increased worker shortages in critical domains such as health care.

There’s only one problem. It’s all a mirage. Biden’s so-called vaccine mandate doesn’t exist — at least, not yet. So far, all we have is his press conference and other such made-for-media huff-puffing. No such rule even claiming to be legally binding has been issued yet.

That’s why nearly two dozen Republican attorneys general who have publicly voiced their opposition to the clearly unconstitutional and illegal mandate haven’t yet filed suit against it, the Office of the Indiana Attorney General confirmed for me. There is no mandate to haul into court. And that may be part of the plan.

According to several sources, so far it appears no such mandate has been sent to the White House’s Office of Information and Regulatory Affairs yet for approval. The White House, the Occupational Safety and Health Administration (OSHA), and the Department of Labor haven’t released any official guidance for the alleged mandate. There is no executive order. There’s nothing but press statements.

Despite what you may have been falsely led to believe by the media fantasy projection machine, press statements have exactly zero legal authority.

“There is nothing there yet that gives employers any mandate,” Stephanie McFarland, spokeswoman for the Indiana Occupational Safety and Health Administration, told me Oct. 6. “The president made an announcement on this asking OSHA to do it, but we’ve not yet seen anything come from it yet,” she also said. When the state agency gets any further information, she said, they’ll review it.

To impose the public perception of a mandate, the Biden administration is following an unusual rule-making process it also employed earlier this year, called an emergency temporary standard (ETS). The spring ETS rule took nearly six months to issue. Meanwhile, companies are telling reporters their vaccine mandates will have at the latest December deadlines. (For those who can’t calendar, that’s four months after Biden’s non-existent mandate was proclaimed. According to OSHA, an ETS takes up to six months to go into effect after the initial mandate is issued in the Federal Register — which, again, for the proclaimed 100-employee mandate hasn’t happened yet.)

Lawyers for big business were blunt about their love for this mandate mirage: “Everybody loves this cover,” Minneapolis employment lawyer Kate Bischoff told Bloomberg Law in September. “Many were already looking down the road at doing this, but the fact that they get to blame Biden is like manna from heaven.”

Using the ETS procedure instead of normal federal rule-making processes both allows the Biden administration to push its demands faster and without any public input or requirement of responding to public input, which is normally required of even legally laughable federal rule-making like this one would be. That is part of why ETS rules have been overwhelmingly overturned in courts.

“OSHA has used that legal authority only 10 times in 50 years,” David Rivkin Jr. and Robert Alt wrote in the Wall Street Journal in September. “Courts have decided challenges to six of those standards, nixing five and upholding only one.”

There are many other reasons any federal vaccine mandate would be obviously illegal and unconstitutional, Rivkin and Alt write, including that “The states have plenary police power to regulate health and safety. Congress has only those limited powers enumerated in the Constitution. That wouldn’t include the authority to impose a $155 fine (today’s equivalent of the $5 at stake in Jacobson) on an individual who declines to be vaccinated, much less to prevent him from earning a livelihood.”

But who needs the Constitution when you have an American people conditioned for compliance with even wildly outlandish things the screen people insist they must think and do?

Earlier this week, the Wall Street Journal published a letter from Bruce Atkinson making several excellent observations about the nonexistent mandate, including the following:

The mandate’s nonexistence shields the Biden administration from legal challenges that may ultimately restrict the Occupational Safety and Health Administration’s authority. Yet the mandate is still effective at compelling industries and companies into compliance, as it leaves room for any eventual issuance to target noncompliant entities. This implied cudgel is particularly effective on industries and companies that are dependent on federal spending or the goodwill of federal regulators. The nonexistent mandate also allows so-inclined state and local governments and companies to issue their own mandates, seemingly in lockstep with Washington.

The Biden White House has been well-served by presenting a nonexistent mandate as a done deal.

Now, let me see, what presidential administration does all this remind you of? Why, that of Mr. “Pen and Phone” himself, Barack Obama.

His also wildly unconstitutional Deferred Action for Child Arrivals was simply a two-page memo, for example, but it is still allowing some 616,000 people to simply ignore major U.S. laws, and could easily be reinstated by courts as litigation continues nearly a decade later. It seems that, given such unchecked gains from openly lawless actions Democrats have turned into standard operating procedure over the years, Joe Biden feels free to reduce that constitutional contempt to simply a phone now.

What this “government by press release” also allows is for Republicans like Indiana Gov. Eric Holcomb to complain about Biden’s tyranny while using zip, nada, zilch of their elected authority to stop it. Holcomb has used the same executive rule-by-decree throughout the lockdown era without effective restraint by a supermajority-Republican state legislature, even telling the press churches were required to deliver Christ’s Body and Blood his way while quietly keeping that part out of his executive orders, surely because government dictating religious exercise is obviously unconstitutional and would quickly have generated lawsuits.

All this allows weak Republicans and evil Democrats to shadowbox each other for the cameras while ordinary Americans suffer under their abdicated leadership. By the time Republican attorneys general get around to filing lawsuits over any eventually issued legal documents that fulfill Biden’s promises, the vast majority of people not wanting government to force them into medical procedures will likely be unemployed, forcibly injected with treatments that have almost no track record, forced from their education paths, provided with fake documents like these citizens are beneath COVID-rule-exempt illegal aliens, and all the rest.

This is how weak Republicans keep letting Democrats go right on gleefully disemboweling our rights just like they have nearly 50 million of the American unborn. Gee, thanks, “public servants.” Tell me another one about how you love American liberties and the Bill of Rights. I’ll believe that when I see you sacrificing anything substantial to fight for them.

What Democrats are doing as Republicans stand down yet again is a moral and constitutional abomination. Not even the fig-leaf pose of a pen signing balderdash-filled documents is needed for today’s Democrats. Whatever they say, you do. You have no rights or say in the matter, no possibility for objecting to even them forcibly injecting things into your own body and the bodies of your children.

These people believe they are royalty, and too many Americans are acting like they’re these losers’ serfs instead of citizens endowed by God with inalienable rights, including the right to consent — through elected representatives, not never-elected dictatorial bureaucrats — to rules that restrict our rights, everyday lives, and human dignity.

Joy Pullmann is executive editor of The Federalist, a happy wife, and the mother of six children. Her newest ebook is a design-your-own summer camp kit, and her bestselling ebook is “Classic Books for Young Children.” Sign up here to get early access to her next full-length book, “How To Control The Internet So It Doesn’t Control You.” A Hillsdale College honors graduate, @JoyPullmann is also the author of “The Education Invasion: How Common Core Fights Parents for Control of American Kids,” from Encounter Books.
Spread the love
Spread the love
Previous StorySearch for and Track Legislation with BillCam! Here’s how!
Next StoryFIVE FREEDOMS: Oregon First Responders, Healthcare Professionals and Government Employees Join in Lawsuit.