“FIVE FREEDOMS” – CITIZENS’ CORNER: SENATOR BECCA RAUSCH SPARKS OUTRAGE WITH PARENTS, CHILDCARE PROVIDERS & EDUCATORS FOR   PROPOSING THAT IT BE AGAINST THE LAW TO BREATHE WITHOUT A MASK FOR  2 YEAR OLDS AND UP 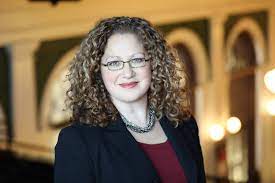 Not only was Rausch met with disapproval for her proposed controversial universal masking law during her appearance at the Ashland Farmer’s Market on Saturday, but dozens of protestors were shouting, “Let them breathe!” at Rausch’s Needham home on Sunday. And, it doesn’t stop there. Protestors shared messages that they will be back in Rausch’s neighborhood first thing Monday morning at 8 am, too. They’ll be organizing at 135 Wellesley Avenue, Needham, and the Eliot Elementary School.

Where public health is concerned, the junior Senator may think she knows better than Governor Charlie Baker, too. In the Youtube video below, Rausch explains how Baker has “failed to follow the science,” so she has proposed legislation that would make it against the law to breathe without a mask for children age 2 and up through college. The law would include all childcare providers, teachers, and staff, too. https://youtu.be/mjGtywTH-K0

Parents are not happy with the prospect of forced masking again, after indications from several sources, including DESE, that there would be no mask requirements this fall.

When asked about her proposed legislation to make Universal Masking a law for all children from 2 years old and up, Rausch had much less to say:

Among those in the vocal group of protestors were medical freedom advocate, Julie Booras, of Health Rights MA, Congressional Candidate, Jeffrey Sossa-Paquette, and members of the advocacy groups, Mass Against Mandates, We the People of MA, and Make Americans Free Again.