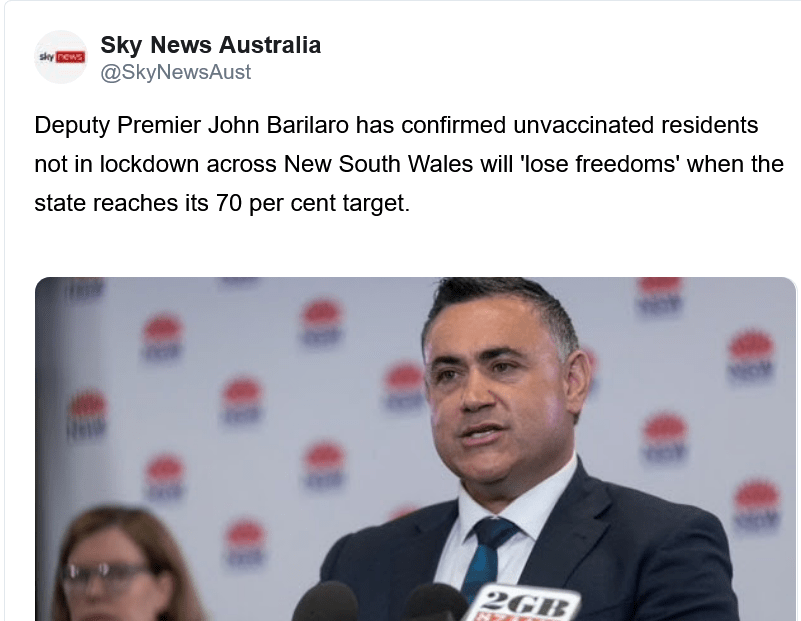 If the images and videos coming out of the COVID Police State in Australia are not terrifying enough for you, wait until you hear about the latest going on within the ruling federal regimes Down Under.

On October 11, Australia’s most populous state will officially transform into an apartheid state, becoming the first known territory in the world to radically segregate “unvaccinated” citizens from greater society. Aussie authorities in the country’s most populous state have now set a plan in motion to strip citizens of their rights and subject them to mandatory home confinement as punishment for refusing to “voluntarily” take the COVID shots.

In New South Wales (Australia’s most populous state, which includes Sydney), the politicians who rule the state has declared that on October 11, society will be segregated into two classes.

After emerging from the latest months-long lockdown in NSW, those who decided to take the COVID shots will be granted some of their select freedoms back. Of course, this policy, like all other policies during the COVID era, can be canceled based on the random whims of politicians.

And those who decided not to “voluntarily” comply with the regime will be seeing a reduction in their rights. The “unvaccinated” will be forced into home confinement.

In a press conference Monday, NSW Deputy Premier John Barilaro confirmed the creation of an apartheid regime in the state, commencing on October 11.

“The 70 per cent roadmap does apply to the whole state so there will be individuals in regional and rural New South Wales who choose not to be vaccinated who will lose their freedoms on 11 October,” Barilaro announced.

“The message to the unvaccinated is that you will not achieve any further freedom unless you get vaccinated.” NSW Deputy Premier John Barilaro

Barilaro’s comments followed an address by Gladys Berejiklian, the premier of NSW, who announced that “unvaccinated” citizens would have to wait until at least December 1 to emerge from the lockdown of the noncompliant, but added that it was just a potential date and that everything was subject to change.

“They will have to wait 80 per cent plus a month and some. It is a disappointing day for those who are unvaccinated,” she declared.

Nine News Australia has put together a list of the “freedoms” Australians will partially receive, should they accommodate the demands of the regime:

Re-Printed with permission from the Dossier