Economy and Inflation Hands Down Top Issue for 2022 Voters 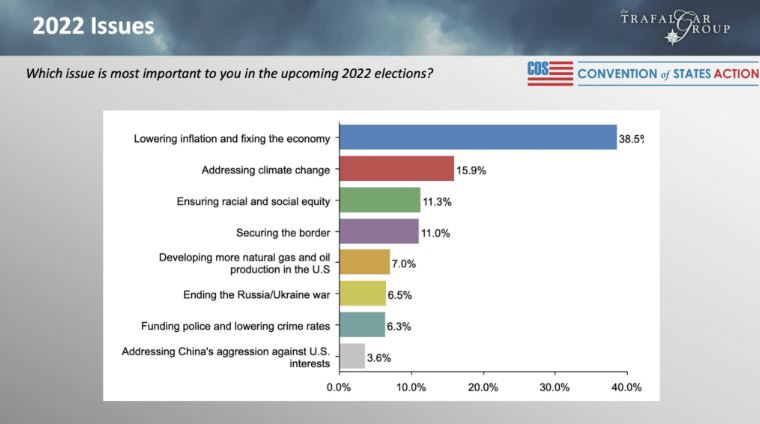 Economy and Inflation Hands Down Top Issue for 2022 Voters

(Austin, TX—May 5, 2022) Convention of States Action, in partnership with The Trafalgar Group—one of America’s most accurate pollsters in 2016, 2018, 2020, and 2021—is releasing the results of a new national survey. Results were from surveys conducted April 24th through April 27th of over 1,000 likely 2022 election voters.

“The worsening economy and rising prices are far and away the most important issues the American voters are focusing on this year, yet the Biden administration continues to show how out of touch they are with everyday Americans on basic economic issues,” said Mark Meckler, President of Convention of States Action. “As alarming news broke of our country’s GDP dropping further than expected, President Biden was busy hinting at forgiveness of student loans, and now they are using the leak from the Supreme Court to shift the narrative to social issues. But Americans want to see common-sense leadership and priority placed on fixing our economy, and to date Biden and his fellow Democrats have provided none of that, instead focusing on a multitude of issues which won’t help the average American.”
For complete details on the poll, including graphics, please visit:

KEY INSIGHT: Independents and Republicans Focused on Fixing Economy While Democrats are Divided Between Economy and Climate Change: