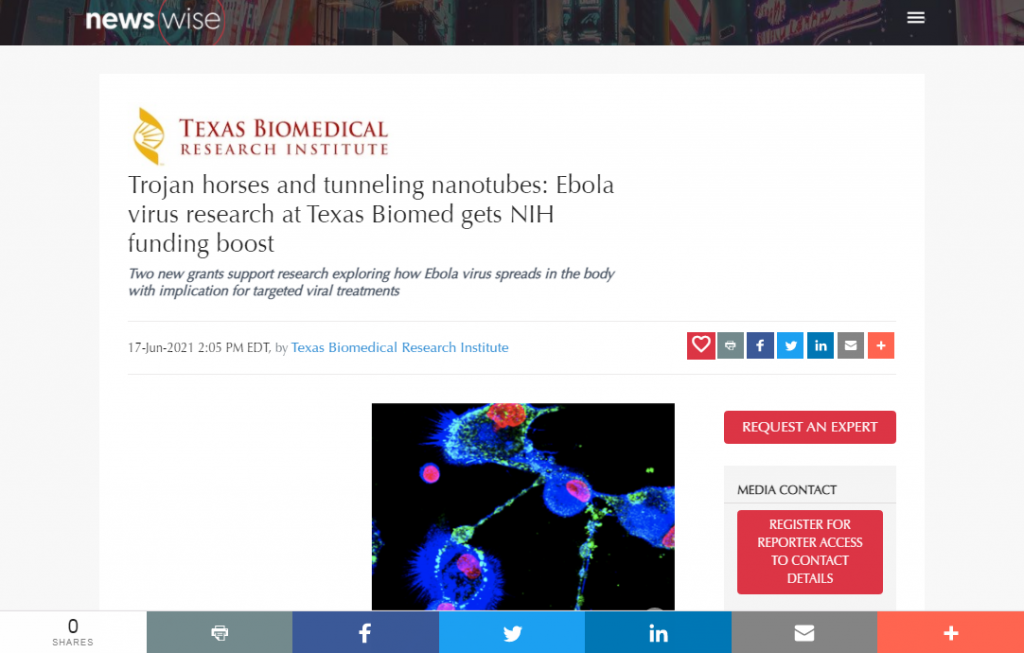 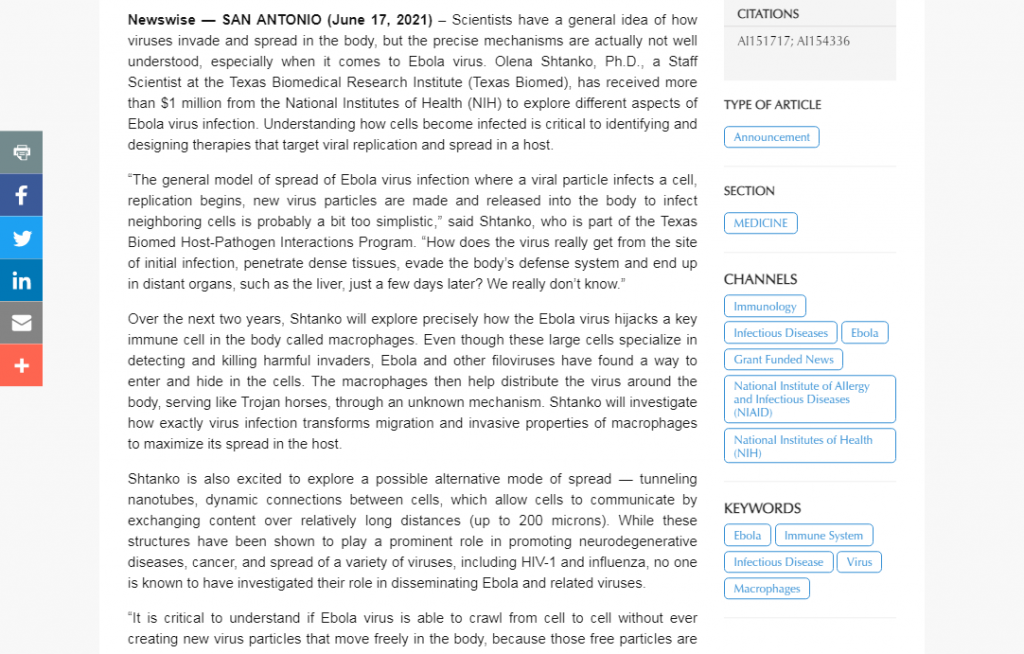 SAN ANTONIO (June 17, 2021) – Scientists have a general idea of how viruses invade and spread in the body, but the precise mechanisms are actually not well understood, especially when it comes to Ebola virus. Olena Shtanko, Ph.D., a Staff Scientist at the Texas Biomedical Research Institute (Texas Biomed), has received more than $1 million from the National Institutes of Health (NIH) to explore different aspects of Ebola virus infection. Understanding how cells become infected is critical to identifying and designing therapies that target viral replication and spread in a host.

“The general model of spread of Ebola virus infection where a viral particle infects a cell, replication begins, new virus particles are made and released into the body to infect neighboring cells is probably a bit too simplistic,” said Shtanko, who is part of the Texas Biomed Host-Pathogen Interactions Program. “How does the virus really get from the site of initial infection, penetrate dense tissues, evade the body’s defense system and end up in distant organs, such as the liver, just a few days later? We really don’t know.”

Over the next two years, Shtanko will explore precisely how the Ebola virus hijacks a key immune cell in the body called macrophages. Even though these large cells specialize in detecting and killing harmful invaders, Ebola and other filoviruses have found a way to enter and hide in the cells. The macrophages then help distribute the virus around the body, serving like Trojan horses, through an unknown mechanism. Shtanko will investigate how exactly virus infection transforms migration and invasive properties of macrophages to maximize its spread in the host.

Shtanko is also excited to explore a possible alternative mode of spread — tunneling nanotubes, dynamic connections between cells, which allow cells to communicate by exchanging content over relatively long distances (up to 200 microns). While these structures have been shown to play a prominent role in promoting neurodegenerative diseases, cancer, and spread of a variety of viruses, including HIV-1 and influenza, no one is known to have investigated their role in disseminating Ebola and related viruses.

“It is critical to understand if Ebola virus is able to crawl from cell to cell without ever creating new virus particles that move freely in the body, because those free particles are the typical targets for the immune system and pharmaceutical interventions,” Shtanko said.

Such basic research insights can help inform development of more effective anti-viral treatments or vaccines. The research projects will involve cells and tissues infected with Ebola virus – research that can only be safely conducted in the highest level biocontainment laboratories, called BSL4. Texas Biomed is uniquely positioned for this type of research, hosting both a BSL4 lab and the Southwest National Primate Research Center. While this initial research will be in vitro (or in a petri dish), the studies will eventually move to more advanced animal models.

Texas Biomed is one of the world’s leading independent biomedical research institutions dedicated to eradicating infection and advancing health worldwide through innovative biomedical research. Texas Biomed partners with researchers and institutions around the world to develop vaccines and therapeutics against viral pathogens causing AIDS, hepatitis, hemorrhagic fever, tuberculosis and parasitic diseases responsible for malaria and schistosomiasis disease. The Institute has programs in host-pathogen interaction, disease intervention and prevention, and population health to understand the links between infectious diseases and other diseases such as aging, cardiovascular disease, diabetes and obesity. For more information on Texas Biomed, go to www.TxBiomed.org.