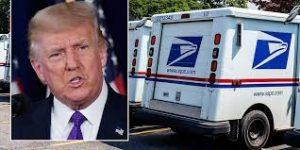 A lawsuit that promises to be one of many was filed on Monday in U.S. District Court in New York to stop Donald Trump’s sabotage of the mail leading up to the presidential election.

Mondaire Jones et al. v. U.S. Postal Service, Postmaster General, and Donald Trump was brought by Democratic candidates for national and state congressional seats, as well as voters who cast mail ballots to protect themselves against the COVID-19 pandemic. Several state attorneys general are expected to file litigation this week.

“The postmaster general and the members of USPS [United States Postal Service] board of governors can be sued for injunctive relief, or even for damages,” Berkeley Law School Dean Erwin Chemerinsky told Truthout. In addition, he said, “The USPS can be sued for an injunction.”

In late June, nonpartisan nonprofit Protect Democracy filed a request under the Freedom of Information Act to obtain documents relating to the USPS’s preparations for the anticipated surge in mail voting in the 2020 election. The USPS resisted the request and on August 12, Protect Democracy filed a lawsuit asking the U.S. District Court for the District of Columbia to order the USPS to provide the requested documents “on an expedited basis.”

The complaint in Jones seeks an injunction requiring that the defendants ensure sufficient funding for the USPS so it can treat absentee and mail ballots equal to in-person ballots and “handle a record level of mail voting.” The complaint also asks for a declaratory judgment that the defendants violated the plaintiffs’ rights under the U.S. Constitution.

“President Donald J. Trump and his newly appointed Postmaster General Louis DeJoy have set about to ensure USPS cannot reliably deliver election mail,” the complaint reads. “As a Trump deputy campaign manager put it, ‘[t]he President views vote by mail as a threat to his election.’”

Trump is weaponizing the Postal Service to help him win.

On May 6, the USPS board of governors appointed DeJoy, who has multiple conflicts of interest, to be postmaster general. Since Dejoy was not an appointee vetted by the Senate, there was no ethics investigation before his appointment.

DeJoy instituted several changes that weaken the USPS’s ability to deliver the mail in a timely manner. One new policy states, “If the plants run late, they will keep the mail for the next day.” It forbids any overtime and “all other measures used to ameliorate staffing shortages.” Extra trips are not permitted and carriers are required to return from their routes on time even if they haven’t completed their deliveries for that day.

Since June, with no reason or explanation, the USPS has removed or destroyed at least 671 mail-sorting machines throughout the United States. The Jones complaint states that “some major cities have already had their ability to sort mail reduced by hundreds of thousands of pieces of mail per hour.” As of August 14, the capacity of the USPS to process mail has been reduced by over 21.4 million pieces of mail per hour.

The “burden of this diminished capacity” falls, at least partly, on locations in states where the election will likely be close, as well as major cities likely to go Democratic that will influence the national popular vote tally.

In addition, the USPS began to remove many mailboxes in several states, including New York, Pennsylvania, Oregon and Montana. That process apparently stopped after public blowback.

The USPS sent letters to 46 states and Washington, D.C., saying it can’t guarantee that all votes cast by mail will arrive in time to be tallied for the November election. Even voters who comply with their state election laws cannot be sure their votes will be counted.

Trump made a bald-faced admission that, “[T]hey’re not going to get the $3.5 billion [in election funding for the states]. Therefore, they can’t do the universal mail-in vote. It’s very simple. How are they going to do it if they don’t have the money to do it?”

An unprecedented 76 percent of Americans are eligible to vote by mail.

The complaint alleges two violations of 42 U.S.C. section 1983: First Amendment Right to Vote, and Equal Protection and One-Person-One-Vote. It cited the Supreme Court’s decision in Yick Wo v. Hopkins, which held that the right to vote is the “fundamental political right, because [it is] preservative of all rights.”

There are other legal grounds on which to seek an injunction as well. Chemerinsky cited section 702 of the Administrative Procedures Act: A person who has suffered a legal wrong or has been adversely affected because of an action by an agency, official or employee, can get an injunction to stop the practice.

Moreover, officials who delay or obstruct the mail can be charged in federal court with felonies or misdemeanors, respectively. Democratic Representatives Ted Lieu and Hakeem Jeffries wrote to FBI Director Christopher Wray, stating that the defendants have “retarded the passage of mail” (18 U.S.C. section 1701) and “if their intent in doing so was to affect mail-in balloting or was motivated by personal financial reasons, then they likely committed crimes.”

Meanwhile, on August 10, the “Delivering for America Act” was introduced in the House of Representatives. It would forbid the USPS from implementing or approving any changes to the operations or level of service provided by the Postal Service from those in effect on January 1, 2020. That includes any “change that would have the effect of delaying mail, allowing for the non-delivery of mail to a delivery route, or increasing the volume of undelivered mail.” Speaker of the House Nancy Pelosi has recalled House members from their recess to consider the legislation on Saturday.

The postmaster general and the chairman of the USPS board of governors will testify before the House Oversight and Reform Committee on August 24 about the “sweeping operational and organizational changes at the Postal Service.”

Trump’s attacks on the Postal Service are undermining public trust in the sanctity of the election. Victories in lawsuits challenging his administration’s sabotage of the mail could help to restore confidence that all mail ballots will be counted.

We must ensure that Trump’s attacks on the Postal Service end now.