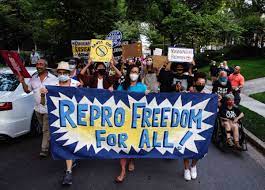 The Supreme Court’s greenlighting of the most draconian anti-abortion law in the country has had the right wing’s “desired effect of deterring abortion providers from offering virtually any abortions” in Texas since September 1, according to the Department of Justice (DOJ).

S.B. 8 prohibits abortions after six weeks of pregnancy, before most people even know they’re pregnant. S.B. 8 is thus in direct conflict with Roe v. Wade, which is supposed to protect the right to abortion until the fetus is viable — about 22-24 weeks.

Outlawing abortion will not prevent abortions. It will prevent safe abortions from occurring within the state. Some pregnant people who can afford to travel out of Texas will get safe abortions elsewhere. Poor, rural, undocumented and non-white women in Texas will be those most directly harmed by S.B. 8.

The high court’s 5-4 decision in Whole Woman’s Health v. Jackson, allowing S.B. 8 to go into effect before they ever consider the merits of the case, was one paragraph long. It didn’t rule on the constitutionality of S.B. 8, but cited procedural problems with the lawsuit. Chief Justice John Roberts joined the three liberals on the Court in voting to stop S.B. 8 from taking effect until lower courts had considered the case and full briefing and oral argument had occurred. The willingness of Clarence Thomas, Samuel Alito, Brett Kavanaugh, Neil Gorsuch and Amy Coney Barrett to allow a law that directly violates Roe v. Wade to be enforced so quickly does not bode well for the fate of Roe.

On September 9, fearing for the durability of Roe in light of the preliminary Supreme Court ruling in Whole Women’s Health, the DOJ filed a federal lawsuit in United States v. Texas, challenging the constitutionality of S.B. 8. The lawsuit seeks a declaratory judgment that S.B. 8 violates the Supremacy Clause and the Fourteenth Amendment, it is preempted by federal law, and it violates the doctrine of intergovernmental immunity. The DOJ also asks for a preliminary and permanent injunction forbidding Texas — including its officers, employees and agents, as well as private parties who would file suit under the law — from implementing or enforcing S.B. 8.

On September 14, the DOJ filed an Emergency Motion for a Temporary Restraining Order or Preliminary Injunction in U.S. v. Texas. It asked the court to immediately halt the implementation of S.B. 8.

U.S. District Judge Robert Pitman denied the DOJ’s emergency motion. He gave Texas until September 29 to file opposition to the DOJ’s motion and set October 1 as the deadline for the DOJ to respond.

The DOJ argues that an injunction should be granted because: (1) it is likely to succeed on the merits that S.B. 8 is unconstitutional; (2) the United States is likely to suffer irreparable harm without an injunction because Texas women are being denied their constitutional right to an abortion and S.B. 8 restricts the operations and responsibilities of the federal government; (3) the balance of fairness tips in its favor because the U.S. has a strong and legitimate interest in ensuring the states respect their obligations under the Constitution and federal law, but Texas won’t suffer “any cognizable harm” from an injunction; and (4) an injunction would be in the public interest by protecting constitutional rights and advancing the rule of law.

“To date, abortion providers have ceased providing services prohibited by S.B. 8, leaving women in Texas unacceptably and unconstitutionally deprived of abortion services,” the DOJ states. “Yet, despite this flagrant deprivation of rights, S.B. 8 remains in effect.”

Moreover, the DOJ notes, “Women are being forced to travel hundreds — and sometimes thousands — of miles to obtain an abortion under harrowing circumstances in the middle of a COVID surge.” Clinics in others states are seeing large increases in survivors of sexual assault, minors, patients with maternal or fetal diagnoses, and patients with later gestational ages.

S.B. 8, the DOJ maintains, “conflicts with federal law by purporting to prohibit federal agencies from carrying out their responsibilities under federal law related to abortion services.” These agencies include the Department of Labor, the Bureau of Prisons, the Office of Refugee Resettlement, the Office of Personnel Management, the Centers for Medicare and Medicaid Services, and the Department of Defense. For example:

S.B. 8 conflicts with federal law by purporting to prohibit the administration of and payment for all abortions in Texas arising from rape or incest after a fetal heartbeat is detected. The statute arbitrarily denies Medicaid beneficiaries coverage of a procedure for which Medicaid coverage is mandatory.

The way to oppose unconstitutional laws is by suing the government officials who enforce them. In order to insulate Texas’s unconstitutional law from being challenged in court, S.B. 8 deputizes private citizens to enforce it by suing abortion providers and anyone who “aids and abets” or “intends” to aid and abet a person in getting an abortion. Any person — including friends, relatives, doctors, nurses, clergy, counselors or taxi drivers — can be sued by any nongovernment person. Under S.B. 8, defendants who lose in Texas courts – which have been packed by Donald Trump and other Republican presidents with right-wing anti-choice judges — must pay the winning plaintiff a $10,000 bounty plus attorney’s fees.

These private plaintiffs are really “state actors,” the DOJ says, because “they are significantly involved in conduct that would be unconstitutional if engaged in by the State itself or Texas has sanctioned their conduct.”

U.S. v. Texas was filed in the U.S. District Court for the Western District of Texas, in Austin. Attorneys general in 23 other states are calling on the district court judge to rule in favor of the DOJ.

Regardless of how the district judge ultimately rules on the merits, there will be an appeal to the conservative Fifth Circuit Court of Appeals. In all likelihood, S.B. 8 will again reach the Supreme Court, which would then decide whether it is constitutional. The five right-wing “justices” who signed the one-paragraph ruling green-lighting the enforcement of S.B. 8 could use U.S. v. Texas to overrule Roe v. Wade if they don’t do it first in the Mississippi case which they will hear on December 1.

On September 13, Judge Karin Crump of the Texas District Court of Travis County issued a temporary injunction against the defendant, the anti-abortion group Texas Right to Life, its officers, agents, servants, employees and attorneys “and all persons in active concert and participation with Defendants.” The injunction (which the defendants did not oppose) prevents them from suing Planned Parenthood and their physicians and staff under S.B. 8 until at least April 2022, when a trial on the merits is scheduled.

Judge Crump found that the plaintiff, Planned Parenthood, “will be imminently and irreparably harmed” in the absence of a temporary injunction; the defendants have not shown they will suffer harm if the temporary injunction is granted; the plaintiffs “have a probable right to relief on their claims that S.B. 8 violates the Texas Constitution;” and the plaintiffs have “no other adequate remedy at law” to prevent private enforcement lawsuits against them under S.B. 8.

This injunction blocks only Texas Right to Life from filing S.B. 8 lawsuits against Planned Parenthood and their physicians and staff throughout Texas. S.B. 8 remains in effect for everyone else. “This temporary injunction is an important step, but it is not enough relief for our staff and the seven million women of reproductive age in Texas for whom abortion care remains virtually inaccessible,” Helene Krasnoff, Planned Parenthood’s vice president for public policy litigation and law, said in a statement. “Planned Parenthood and its partners will continue fighting S.B. 8 in court and working to restore Texans’ access to abortion.”

Meanwhile, Texas Right to Life set up a site encouraging vigilantes to snitch on people they know who have had abortions. But GoDaddy refused to host the site for collecting “non-public or personally identifiable information” without written consent. Epik, the domain for Gab and Parler, also declined Texas Right to Life’s request to host its site.

Lyft and Uber promised to pay the legal fees for any of their drivers who are sued under S.B. 8. Salesforce announced it would cover the expenses for its employees and their families to relocate out of Texas if they are worried about their access to reproductive health care.

In addition to S.B. 8, Texas enacted S.B. 4, which makes it a felony for a doctor to prescribe abortion-inducing pills after seven weeks of pregnancy. S.B. 4 also prohibits mail-orders of abortion medication. Medication abortions have become the most common form of abortion for 60 percent of women who seek early abortions.

Copycat Bills in Other States

Besides Texas, a dozen other states have passed legislation prohibiting abortion after six weeks of pregnancy. Federal judges have blocked those laws because they conflict with Roe v. Wade.

Eleven states have enacted “trigger laws” which would ban all or almost all abortions if Roe is overruled.

State laws making it harder or impossible to obtain an abortion have proliferated. Since January, 19 states have passed 97 restrictions on abortion, 12 of which are outright bans.

Elizabeth Nash, Guttmacher Institute’s policy head on U.S. state issues, said, “2021 has clearly become a defining year for abortion rights in the United States.” She cited the enactment over the past decade of almost 600 abortion restrictions, which “are part of a coordinated anti-abortion campaign with the end goal of banning abortion across the country.”

The Women’s Health Protection Act of 2021, which would codify Roe v. Wade, is pending in the Senate and the House. It will be taken up by the House later this month. The act has sufficient votes to pass in the House but not in the Senate due to the filibuster.

Now is the time for people who support the Act to contact their members of Congress. Our right to control our own bodies and reproductive choices is on the line.