“China Acting Contrary To Its Role In UNHRC” 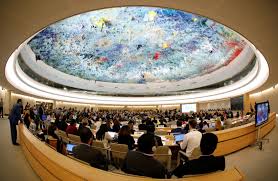 The United Nations General Assembly recently re-elected members of the Human Rights Council. China, which has a notorious human rights record was also re-elected into the Council. Issues of human rights persecution in China such as oppression of religious freedom in Tibet, Uyghur concentration camps in Xinjiang, the prohibition of local language in Inner Mongolia, and implementation of the “National Security Law” in Hong Kong have triggered discussions on crimes against humanity in the UN General Assembly.

The human rights situation in China has been a focus of debate among democratic countries in international organizations including the UNHRC. There are increasing calls for China to stop human rights violations against Muslims in Xinjiang. Last week, Germany issued a statement at the United Nations on behalf of 39 countries showing concerns about the human rights situation in Xinjiang and the latest developments in Hong Kong after the implementation of the new version of the National Security Law. The statement was opposed by Pakistan and Cuba, the other bad actors of human rights and dubbed Germany’s statement as an interference in China’s internal affairs and expressed support for China’s Xinjiang policy.

In recent years, China has taken advantage of its economic strength and the support of the “Belt and Road” and the “Asian Infrastructure Investment Bank” to buy off many weak and small countries. If some smaller nations do not support China, they receive threats of discontinuation of economic incentives.

The election as a member of the “United Nations Human Rights Council” once again demonstrates China’s arrogance and the decline of the “United Nations Human Rights Council”, becoming a “Chinese puppet” following in the footsteps of “World Health Organization”. Although U.S. President Trump announced his withdrawal from some of these international organizations, the U.S. withdrawal will not prevent China from bullying on the international stage. On the contrary, it will reduce the resistance to China’s hegemony. Hence, the democracies siting as permanent members of the United Security Council and other democracies like India, Japan, Australia and Canada should push for reforms of UN and its affiliated bodies to stop China and other bad actors such as Russia, Pakistan, Iran, Saudi Arabia and Cuba from acting contrary to the basic principles and roles of these international organizations.

Spread the love
Spread the love
Previous StoryBulletin Board: EME Jumps On the Notorious RVG in a Southern Equality GOTV Tour
Next Story“Failure of Australia’s Native Title Act”