BULLETIN BOARD: Belief In The “American Dream” Is Higher Abroad Than At Home, According To Report From Global Network Of 60,000 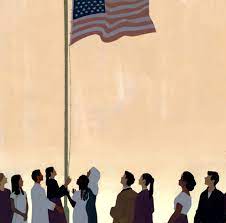 Belief In The “American Dream” Is Higher Abroad Than At Home, According To Report From Global Network Of 60,000

Results Gathered From Over 60,000 Respondents In Under 24 Hours

SAN FRANCISCO, CA, November 12, 2021 – Premise, the innovative new platform that democratizes the way data is sourced, analyzed and applied, recently reported to the Milken Center for Advancing the American Dream at a reception in Los Angles that, according to an international network of 60,000 respondents from 125 nations around the globe, non-Americans believe in the “American Dream” by a slightly higher margin than Americans do – 63%-57%.

The respondents from the United States and abroad are those who sign up on the publicly available Premise App and who chose to answer the various questions concerning attitudes towards the American Dream. The results were presented within 24 hours of the request to a morning reception of guests of the Milken Center by Maury Blackman, CEO of Premise. Blackman was introduced by a consultant to the Milken Center, Dr. Frank Luntz, the world-renowned message and political analyst. Premise has recently retained Dr. Luntz as a strategic advisor.

The results of the questions on the American Dream from the 60,000 respondents were obtained within 24 hours of the request from Dr. Luntz on behalf of the Milken Center.

Here are other results:

“It’s fascinating that America is perceived slightly more favorably by foreigners than by our own residents,” concluded Dr. Luntz. “The country may be suffering from ongoing divisions internally, but we are still a beacon to the world externally. But it is also good news that it seems more Americans who signed onto the Premise app still believe in the American Dream than those who don’t – despite all the divisions in recent years.”

“I’ve worked in over 25 countries throughout my career, but I’ve never had the capability to poll people instantly across the globe,” said Dr. Luntz. “This is so exciting because it opens up literally a world of opportunities at a time when public opinion, reputation and credibility is so essential. Premise is one of the few American companies that can actually tell you what ordinary people around the globe think – literally overnight.”

Premise is a crowdsourced insights company. Our technology connects communities of global smartphone users to source actionable in real-time, cost-effectively, and with the visibility you need. In more than 125 countries and 37 languages, we find Data for Every Decision™. To know more, visit www.premise.com.